INTERVIEW WITH VOICE OF THE SOUL [LEBANON] 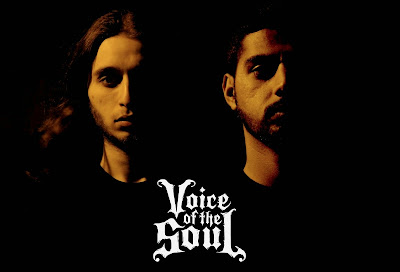 As part of Metality's interviews with the bands performing in the upcoming Metal Gathering on February 11 at Beirut's Metro al Madina organized by Metal Bell Magazine, our managing editor Habib T chatted with Kareem, the guitarist and vocalist of Lebanon's Voice of the Soul, who will share the stage with Nader Sadek: In the Flesh, Slave to Sirens, and Within Destruction.

Habib: You’re sharing the stage with Nader Sadek for the first time I believe? How does that feel? What can we expect?

Kareem: Yes, it will be the first time. I’m pretty excited. As some folks here knew, we were supposed to share the stage together a year or two ago, but due to an emergency it had to be postponed. All in all, I’m glad it’s happening again. I’m looking forward to checking out Derek Roddy in action with my own eyes, as well as the two opening bands, Within Destruction and Slave To Sirens. I always like checking out new bands that the scene has to offer.

What can you tell us about the recent change in your line-up?

Yeah, so Rudy left the band recently, and we wish him all the best. We had an incredible two years with him. He is a fantastic multi-instrumentalist and any band that works with him is going to have a great time.
I’m really excited to have Bachir Ramadan on board though. He’s an old friend, who is obsessed with playing the drums. Fans in the UAE will know him from his days with Perversion, and folks in Lebanon will know him from his time with Weeping Willow. You’re going to get to see his spin on Voice of the Soul’s songs on Saturday. Really happy with how things have been going so far! 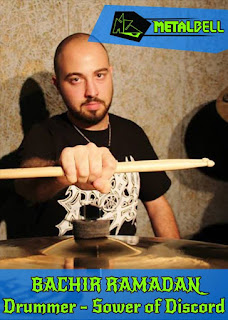 Is there any routine you usually follow to get ready for a show?

A glass of red wine, some relaxing music, and sometimes a walk. I like to have a quick warm up on the guitar 30 minutes or so before my set starts, and make sure it’s tuned up nicely. Also: breathing exercises. Worst thing is feeling like you have to puke halfway through your set.

What have you been listening to a lot lately?

When it comes to metal I’ve been listening to Trees of Eternity’s long-awaited debut album, Hour of the Nightingale. Aleah (RIP), for such a modest human being, has one of the most beautiful voices out there, and comes up with incredible melodies. Juha is one of my favorite song writers, and Kai Hahto? Legend. What a beautiful album. I’m also enjoying the new stuff Mastodon are putting out, and I love the new Testament album.Otherwise, I’m listening to a lot of Low, The National, and A Perfect Circle.

Where do you see the Lebanese metal scene heading after this show?

I really hope we see it moves towards coexistence, mutual understanding, and the end of this immature factionalism. It’s a shame. There is a lot of potential, but there is a lot of internal bullshit that needs to be cleaned up.

Any words for Metality readers?

If you’re in Lebanon, stop by and say hello at the show! And thanks to everyone who keeps supporting Voice of the Soul and local bands they like through and through. Take it easy! 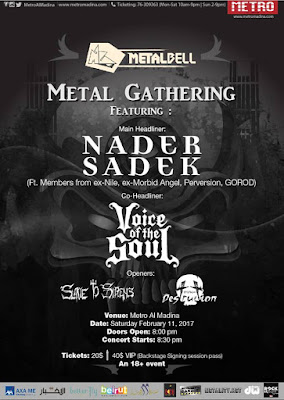