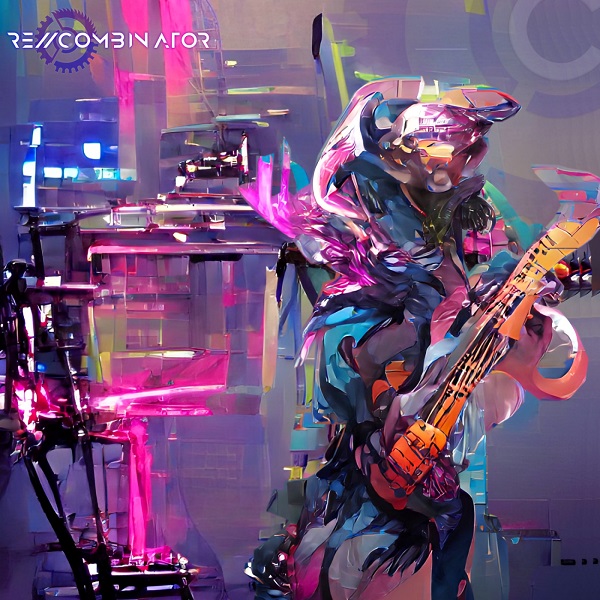 We chat with Seattle-based artist Combinator, recently featured with his album re//combinator.

Combinator’s new EP, re//combinator, struts an eclectic range of styles — from industrial to funk and prog-rock. It’s hard to pin down, stylistically, and I love it. Is there a particular style or phrasing you would classify the album as?

That’s always a tough one for me, and I’d be a better marketer of my own music if I were better at the classification aspect! I’ve taken to simply calling it “allsound”. The music I tend to make is progressive and alternative at its core, in the widest and most fundamental range of what those labels can apply to, and from there shoots out in different directions depending on the track; drum and bass, breakbeat, lo-fi, acoustic, prog metal, alternative rock, and who knows what else.

The first two tracks tout a rhythmic bustling, while the “Hide and Seek” and “Cartoon Character Child” present a more spacious lushness. Was this textural separation always intended, or did it culminate naturally?

I suppose it was an organic thing as opposed to being contrived. I have these two strong, competing forces in me, compelling me towards both melancholy, bittersweet, harmony rich music – but also biting, take no prisoner, aggressive, frenetic and hyper confident music. Reconciling that dichotomy is always a bit of an undertaking. I just try to let the expressions be however they want to, knowing that it’s going to make locking in with one audience all the more difficult.

How did the collaboration arise with Jesse Holt for the “Respira” remixes?

It was an incredible honor – and I don’t mean that like most people flippantly toss it out – to have been approached by Second Coming’s Jesse Holt about remixing Respira, from my last album. Actually, pretty insane! It came out of nowhere. How did he even hear that short, instrumental, non-promoted track in the first place?! We were Facebook friends that had never met in person to my knowledge, and I don’t even recall the genesis anymore, but it was one of the more flattering moments in my life when he messaged me something to the effect of, “I really like your song respira, and I was wondering if I could remix it”! Incredible. Incredibly unlikely. And then he delivered not one, but two mixes. Jesse, I’m moved that the song moved you to such action and effort, and deeply grateful for your contributions to this work!

Do you have any venue recommendations or general advice for music fans visiting Seattle for the first time?

Ooh, sure – The High Dive and Nectar, both in the Fremont neighborhood, are great venues that usually have good acts. I really like Darrel’s Tavern and Aurora Borealis, where I shot my last two videos actually, up by me in Shoreline. Neumo’s in Capitol Hill is great, and the Triple Door right in the heart of downtown is one of my favorite rooms in the city and annoyingly one I haven’t been blessed with the pleasure of playing yet myself. As far as advice; not really, to be honest. The city isn’t what it once was in terms of its arts culture or bohemian nature. Check out KEXP’s concert listings if you’re visiting and go from there!

Do you have a specific process or ritual when creating new music?

No. Things hit me in different ways. Sometimes I’ll record an idea that blooms quickly and naturally into a whole track; sometimes ideas will literally echo in my mind for a decade before becoming close to fully formed. I’m more or less at the mercy of the emotional drive to make something permanent when it’s ripe and ready.

Any favorite artists or albums you’re listening to at the moment?

Absolutely. Anyone who listens to my stuff or follows me on social knows I’m a huge Squarepusher fan – I’m always listening to something he’s doing. I really, really like his recent version of a GoGo Penguin tune called F Maj Pixie, and I love his live band Shobaleader One album, Elektrac. Mars Volta put something new out I still need to check out. Every year or so I’ll go through a several week phase where I have to dive deep into Soul Coughing and/or Morphine for the umpteenth time. Animals as Leaders. Primus has a permanent spot in the rotation.

If you could collaborate with any artist, alive or dead, who would it be?

I’ve asked this of other people so many times! Even though I know he doesn’t like working with other musicians, and we’re already working in some of the same spaces and with the same tools, I’d love to somehow be involved with Squarepusher in some way. Playing with Stevie Ray Vaughan would be pretty great. David Bowie for sure. It’d be cool to do something hyper modern with Stevie Wonder! I think he’s America’s finest and most important living musician and composer. That guy needs a bubble around him and all the protections we can afford him, ‘cause we need him.

What do you find is the most satisfying part of being an artist?

Not having to do what other people want me to do. Just being self directed, being able to indulge all these silly desires, and to amazingly somehow connect with people that seem to legitimately enjoy it and therefore validate your existence in some way. I’ve struggled a lot with the notion of finding purpose in life; doing what I do is my best answer to that existential question, and incredibly fulfilling.

What is the biggest challenge you find in today’s music industry?

Finding an audience. I love the democratization of music and art creation that has happened over the last 15 years or so, but the downside of that is that there’s now just this deluge of musical content, visual content, social media content, etc etc etc. Everyone sees themselves as creators now, as players to some audience… but if everyone is the performer, who exactly comprises the audience? It’s hard to help people find what I do among all the other options there now are, which changes the paradigm and requires a lot more money and time spent on promotion, not as the assistance vehicle it had been in the past, but as a necessary element of any release, just to make people aware of something you’ve done in the vast sea of mediocrity and and excellence and everything in between.

What’s upcoming for the project?

I’ll keep doing what I do, as long as people keep listening. Probably well after that, in all likelihood. It’s a lifelong passion and a lifestyle, so new work is just an eventuality. But right now I’m focused on getting the live performance schedule fleshed out and getting back on stages to connect with people in real life and in that visceral way that only happens via live performance. The more people listen and are vocal about their joy and appreciation; the more they amplify what they love, the easier it gets to bring the show to more people and places!