The OffBeat Year in Review 2021New Orleans Nightlife Office Funding App...Why You Should Get The VaccineThe Light At The End of The Tunnel is Fa...Hurricane Katrina ChroniclesHurricane Ida—More Trauma For Louisiana

The OffBeat Year in Review 2021

The OffBeat Year In Review 2021: The year began with hope that a vaccine would soon be available, and the pandemic would be contained. OffBeat received a letter from subscriber Steve Gilbert of Detroit Michigan, indicating that he misses going out, but that “the wisest decision is to continue the cancellation of all of them [festivals] until conditions are safe for everyone. Mardi Gras in 2021? Unlikely that the pandemic will have passed us by. It seems like a much too dangerous idea to me.” As it turned out his advice was heeded, as both the French Quarter Festival and Jazz Fest announced cancellations of their October 2021 dates (both had been scheduled from spring 2021). OffBeat was hoping to resume printing when the spring festival season began, but the big festival cancellations forced OffBeat to continue publishing digitally. 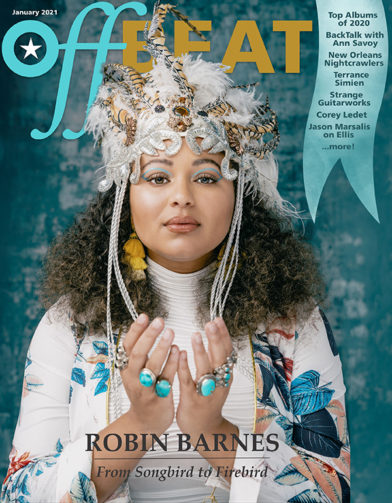 Our year began with a cover feature on Robin Barnes. “Barnes is one of those children who has a momma who recognizes the power of a name. She is these days affectionately called the ‘Songbird of New Orleans,’ but Robin’s mother named her daughter after her hopes for the future. ‘From birth my mom named me Robin which means bright fame, bright light. My mom believed that names represent you as a person to manifest your destiny, and she thought whatever I was going to do was going to be for the world. I was immediately a Rockin’ Robin, a pretty bird, and a songbird.’”

In January we also spoke with Ann Savoy, about the publication of Volume Two of “Cajun Music: A Reflection of a People.” “When I finished Volume I, it was such a massive project. I didn’t even have a computer. When I assembled the book, I glued the pieces in place on a storyboard. I had so many people I wanted to put into Volume I. Finally, a friend of mine said, ‘Ann, look, put out Volume I and then go ahead and do Volume II.’”

We spoke with Jason Marsalis about Ellis Marsalis’ last recording. “Newvelle Records contacted my father first. Dad asked me to talk to them, and they explained what they were doing with their series about New Orleans, that they were a vinyl-only company. I thought about it, and I said ‘Dad, you know what—we ought to do a duet record with just vibes and piano.’ We hadn’t really ever done that. He had his quintet doing his music, and I was playing vibes in my groups. Sometimes we would get together on occasion, but not a lot. So, I said, Dad, let’s do it.” 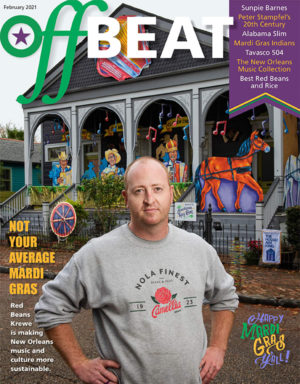 For the first time i n 22 years, OffBeat’s Best of the Beat Awards was not live. Rather the 23rd annual Best of the Beat was a live digital stream over YouTube. If you somehow missed it, you could see it here. We honored the Dirty Dozen Brass Band for music, Mark Bingham for music business and Sandy Hinderlee for music education. The Positive Vibrations Foundation’s HeartBeat Awards went to Dr. Jean Montes for Music, and Cherice Harrison-Nelson for Culture Bearer.

We spoke with Stanton Moore for our April issue about keeping Tipitina’s alive during the pandemic: “We’ve had to exercise ingenuity, do a lot of hard work, and not look at the pandemic as a detriment,” Moore explained. “The pandemic is an opportunity to develop things we had had ideas about before but now can actually execute.”

We also spoke with vocalist Merry Clayton about her upcoming album Beautiful Scars the first recording after her 2014 auto accident in Los Angeles that resulted in the amputation of both her legs below the knee. Following the accident, Clayton endured a five-month hospital stay and four years of rehabilitation. “I want people to know that there is healing and deliverance through anything. But you’ve got to trust God—put yourself in His hands.” 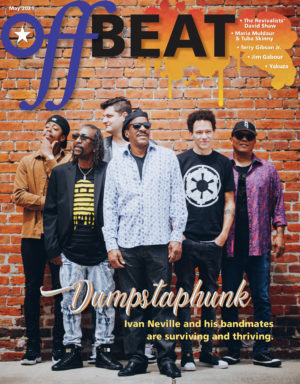 What would have been our Jazz Fest Bible

issue featured Ivan Neville and Dumpstaphunk with another story about surviving the coronavirus. In March 2020, Ivan Neville contracted the coronavirus. Serious though his symptoms were, he avoided being hospitalized and recovered at home with the help of an oxygen tank. A year later the band released its new album, Where Do We Go from Here? with powerfully original songs, as well as timely remakes, with the album and its socially-conscious lyrics addressing America at this moment. “I was thinking about the uncertainty, the questions we have about life and the unknown,” Neville said. “And thinking about not being afraid of the unknown, having faith that it’s going to be all right. If you treat others the way you want to be treated, probably you got a good shot at going somewhere cool.” 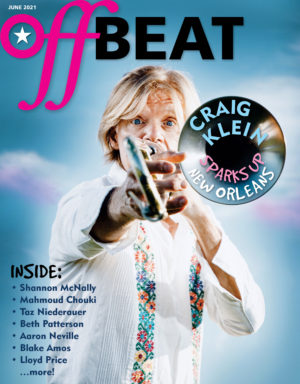 After the New Orleans Nightcrawlers’ Grammy win, trombonist Craig Klein graced the June cover. “When Rebirth won a Grammy nine years ago, I felt like it was a win for all of us,” he says. “So, it was a win for the New Orleans brass band community and hopefully will raise it up and show that this music is as worthy as any other style of music. It can stand up to anything else.” By the way, Klein came by the OffBeat office to show us his Grammy Award!

Speaking of Grammys, in July we spoke with two Grammy winners and nominated artists, Sean Ardoin for our cover and Ledisi for backtalk. When OffBeat congratulated Ledisi on her first Grammy win her response was: “It’s still in the box. I should take it out, but I’ve just been so busy.” New Orleans’ oldest working musician pianist Lawrence Cotton graced our August cover, in a salute to his life in music and appearance at Satchmo SummerFest. “Music has taken me places I never would never have gone.”

With the reissue of Nancy Sinatra’s album Boots OffBeat also spoke with Nancy Sinatra. “Somethin’ Stupid” was magic, absolutely magic. We had separate microphones so they could keep us on separate tracks. Lyrically, it’s just a great song no matter who sings it.” Our September cover featured Bo Dollis Jr. When asked about following in his father’s footsteps, his response: “When I started I just wanted to be an Indian. My dad was grown and I would see these grown guys start crying once he started singing his Indian song. I started traveling with him. People in other countries would go crazy when he hit the stage. I knew he wasn’t Elvis Presley, he wasn’t Michael Jackson. But to them that’s who he was.” With the release of the Michael Murphy documentary film “Irma: My Life In Music” Irma Thomas was our October cover feature. “If people are that curious, I don’t have a problem with the world knowing the musical side of Irma.”

Speaking of Ms. Irma Thomas, in our December interview with Dayna Kurtz when asked who were the female musicians in New Orleans who influenced you: “Irma’s at the top of the list. I had a lot of revelations as a singer watching Irma ’cause she is the classiest damn vocalist on the planet. She’s kind of the opposite of what R&B has become—she never over-sings. Her phrasing is on the money, her tone is gorgeous, it sounds effortless. And every once in a while, she’ll give you her full power, so you know she’s got it, and then she’ll just tuck it right back.” 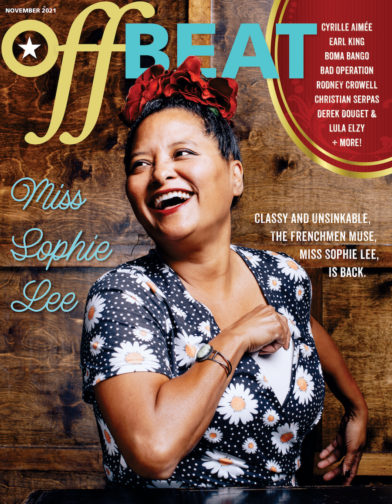 The Frenchmen Muse, vocalist and venue owner (Three Muses), Miss Sofie Lee was OffBeat’s November cover feature. “Sophie Lee’s story over the past year is emblematic of the struggles that local music scenes, especially this one, have faced since the pandemic set in—and the determination it took to get through. She arguably had a tougher haul than most: Three of the hardest-hit groups of people have been artists, club owners and moms, and she’s all three.”

With the Metropolitan Opera preparing to present an opera Fire Shut Up In My Bones composed by an African American (the first time in its history), we were also proud to feature Terence Blanchard in our November issue. “I’m not trying to cast aspersions on the Met,” he says. “It’s just history, where we are. But it’s an amazing thing to go from Porgy and Bess to Fire Set Up In My Bones with nothing in between—and Porgy and Bess wasn’t done by an African American, even though the cast was Black. So that makes a statement in itself, right?” For December we spoke with Lilli Lewis about her new album My American Heart. Lewis sings about the America she wants to believe exists. “When we think of rural America and farming, we think of white people,” she said. “That’s not the whole story. That why I brought these stories together, to say these stories live side by side and, in fact, most of us are family.”

The year saw an unprecedented number of deaths, some due to COVID. In fact, our October issue contained six obituaries. Among the musicians we lost are Carol Fran, Warren Storm, Courtney Granger, Lloyd Price and more. OffBeat writer Roger Hahn and writer/editor Bunny Matthews passed away in 2021. To learn more about the people we lost, here are links to their stories:

Like the music business the pandemic hit the restaurant industry hard. OffBeat continued to support the industry by spotlighting a restaurant each month. Luvi Restaurant (that specializes in raw seafood) was featured in January.

Mr. Ed’s has been serving up seafood since 2013, when Ed McIntyre opened Mr. Ed’s Oyster Bar & Fish House in Metairie. Our March issue featured Mr. Ed’s Oyster Bar. Buttermilk, the newest stall at St. Roch Market was featured in April and Yakuza House, a new restaurant on the local Japanese food scene was featured in May. We explored Barracuda, the popular taco and margarita spot on Tchoupitoulas Street, in June and for the 35th annual French Market Creole Tomato Festival in July we spoke with Gris-Gris chef and owner Eric Cook, about its Creole Tomato Shrimp Remoulade.

The Honduran restaurant in the Bywater Alma Café has become a breakfast and lunch hub. Chef Melissa Araujo says: “We opened during the pandemic, which was interesting,” Araujo said. “We promoted the restaurant for two months before we opened, and we offered table and delivery service. We’ve been successful ever since.”

Melissa Martin, chef and owner of the Mosquito Supper Club, is serving the Cajun home cooking. The Restaurant only holds two seatings each evening—one private and one communal. “I wanted to gather small groups of people so that they could sit together at a table and talk,” Martin said. “I wanted to share stories with people about growing up on the bayou and being Cajun.”

Boucherie, The Courtyard Brewery and Mister Mao were also featured in 2021.

The post The OffBeat Year in Review 2021 appeared first on OffBeat Magazine.