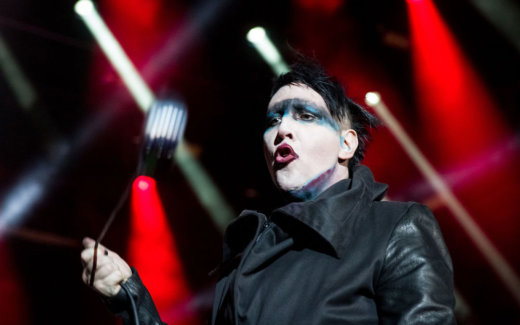 Just when things were looking like shock rocker Marilyn Manson (Brian Werner) was possibly wriggling out of a lot of his legal woes, he gets slapped with yet another sexual misconduct allegation and lawsuit — only this time it dates as far back as the ’90s and allegedly involves an underage girl.

According to a report on Rolling Stone, the plaintiff, now an adult and identified anonymously as “Jane Doe,” claims that Manson sexually assaulted her multiple times just as the artist’s career was really taking off.

Filed in the Nassau County Supreme Court on Long Island, New York, the filing includes Manson’s former record labels Interscope and Nothing Records as co-defendants. In the complaint, Manson was charged with sexual battery and intentional infliction of emotional distress, while the labels were charged with negligence, intentional infliction of emotional distress, and other charges.

According to the lawsuit, Doe claimed that she was 16 when first met Manson in 1995 at a concert in Dallas, Texas. Like any teenage fan, she waited near the tour bus to meet the band, at which point Manson allegedly invited her and other young girls on to the bus. Then, she claims, Manson took down all the girls’ names, asked their age and school grade, and wrote down their addresses and numbers.

It was that evening, Doe claims, that Manson “performed various acts of criminal sexual conduct upon Plaintiff, who was a virgin at the time, including but not limited to forced copulation and vaginal penetration.” Remember, she was 16 at the time. Not only that, but one of Manson’s bandmates allegedly watched it all happen before the girl was told by the vocalist to “get the fuck off my bus” once he was done, adding that he would “kill her and her family” if she ever went to authorities.

Over the next few years, Doe received access to Manson and was groomed into going out with him while on tour, all the while getting emotionally, physically, and sexually abused. She was also introduced to hard drugs as a result of her time with Manson, the lawsuit alleges. Even after she turned 18 and was dating Nine Inch Nails drummer Chris Vrenna in or around 1999, Doe said she continued to be sexually abused and groomed by Manson. At times, the lawsuit alleges, Manson would get her to have sex with his bandmates and/or his assistant at the same time.

“Defendant Warner controlled what Plaintiff could do, who could touch Plaintiff, and who he wanted Plaintiff to be with sexually, all while providing Plaintiff with drugs.”

In addition to all of her allegations against Manson, Doe claims the record labels were “were well-aware of Defendant Warner’s obsession with sexual violence and childhood sexual assault…At no time did Defendant Interscope and Defendant Nothing Records have a reasonable system or procedure in place to investigate, supervise, or monitor its staff and/or agents, including Defendant Warner, to prevent pre-sexual grooming and sexual harassment, molestation, and assault of fans, including minors and women.”

Honestly, the details in this case are horrific. And once again, if even half this shit is true, it’s monstrous. I’m sure we’ll get a ton of comments from Manson fanboys and fangirls that claim he did nothing wrong and that this girl is making it all up or some horrific bullshit, but let’s be real here. This isn’t the first time we’ve heard of Manson’s rapey ways — maybe it’s time we start living with the idea that “if there’s smoke, there’s fire.”

Still, he’s innocent until proven guilty in a court of law, so we’ll see how this suit shakes up for Manson…

The post Marilyn Manson Sued for Allegedly Grooming and Sexually Assaulting a Minor in the ’90s appeared first on MetalSucks.