Slog AM: This Cold Won't Last Long, 90-Day Review of Traffic Safety Zooms Past Day 100, and a Warning for Furries

It’s cold. You don’t need me to tell you this, but temperatures dropped into the 20s overnight. The King County Regional Homelessness Authority has activated emergency shelters from now through February 2. If you’d like to help out your unhoused neighbors, KCRHA recommends donating directly to local service providers, and they’ve provided a spreadsheet of providers here (but it’s pretty confusing, and there’s no clear way to donate). It’ll warm a bit tomorrow into the low 40s, with temperatures maaaaaybe cracking the 50s by the weekend.

You’ve got about two weeks left to vote yes on I-135. But don’t wait. You should have your ballot now, so go ahead and fill it out. There’s only one question on the whole thing. This one’s a slam dunk: Everyone you trust (including the SECB) has endorsed a yes vote, and everyone you don’t trust says to vote no. And yeah, it’s not a perfect solution to the housing crisis, but do you really think the current system is working well? Here’s the scene at this weekend’s Yes-On-I-135 rally:

Shaun Scott stressed the potential of social housing to stop the displacements of people of color and renters. #YesOnI135 pic.twitter.com/xL1UKrqUmp

There were two similar attacks on religious buildings in New Jersey this weekend. A man in black threw a Molotov cocktail at a synagogue, but the bottle broke and the fire didn’t spread. In a separate incident, an unspecified attack was reported at an antiracism event at an Episcopal church.

Has anyone seen Sean’s bike? Keep an eye out for it. Sean says he gave cops the stolen bike's location, since it has a tracker, and also a very clear picture of the thief, but he says so far the police have done nothing.

Bike was stolen last night. So many emotions/questions...
1. Grateful I have public transit to rely on. 🚎
2. Why do I need a guy w/ a gun for this report? 🚓
3. Do I need a fortress to keep things safe? 🏰
4. Why is it easier to gain wealth through theft than through work? 💰 pic.twitter.com/f0HET5A8GI

Here is a very pleasant story about a thrift store project up near Bellingham. A retired teacher created the shop, where everything is 50 cents, two years ago. Their mission is to help vulnerable members of the community.

If you believe the new mini-viaduct is “multi-modal,” I’d be happy to sell it to you. Don’t fall for the buzzwords coming out of the failed waterfront rebuild project. They’re calling it “multi-modal” because it has a five-foot sidewalk alongside a four-lane, 44-foot-wide highway. Does this look like someplace you’d enjoy riding a bike with your kids and elderly parents?

For some more context: pic.twitter.com/FpVKd5EN7T

Utah passed a ban on medical care for trans youth. Governor Spencer Cox signed a bill this weekend that will block access to gender affirming care. The bill also directs the state to pay $42 million for students to opt out of public schools.

Furries beware. Recently I’ve seen an increase in TERFs and right-wingers attacking furries online, for some reason. Why furries, and why now? Who knows. But as someone who’s been going to cons long enough to remember the CSI and MTV debacles, the Burned Furs, and, of course, the Raiders, this sure does seem like a project I would avoid:

A far-right casting director is looking for furries using a sock-puppet account. Looks like a trap. https://t.co/QrZ7yUMTK9

So long to our Borg queen. Actress Annie Wersching passed away of cancer this weekend at the age of 45. In addition to her role on Picard, she voiced Tess in The Last of Us, and she appeared on General Hospital, 24, The Vampire Diaries, and many more. A GoFundMe for her family is here.

Seattle City Council Member Andrew Lewis has thoughts about how the City should be spending money. I hope he knows someone who can do something about that! We all know how frustrating it is to be a passive onlooker with no control over the City’s budget or departmental priorities:

The benefit of this sign is debatable, but there is no denying it is a "nice to have" rather than a "need to have".

Going forward, car-centric "nice to haves" need to be the first thing we put on hold. It is infuriating to see this sign completed while Thomas Street is on hold. https://t.co/ot41eP37Nz

There was a memorial ride for Jaahnavi Kandula on Friday. A police officer hit and killed Kandula while she was crossing the street. SDOT director Greg Spotts also visited the site of her killing, where a small memorial has appeared. “I want our streets to be safer,” he wrote. On Greg’s first day on the job, he said he ordered SDOT to conduct a 90-day review of its Vision Zero program, which aims to end traffic deaths.

His first day as interim director was September 7, which means we’re currently on day 145 of that 90-day review. (Or, if we’re counting from his swearing-in date of October 5, we’re on day 116.) For the last few weeks, Greg has only said that the review is done, but they’re not ready to release it yet. I’m starting to wonder if it actually exists at all. Or, if it does, who’s keeping it from us. 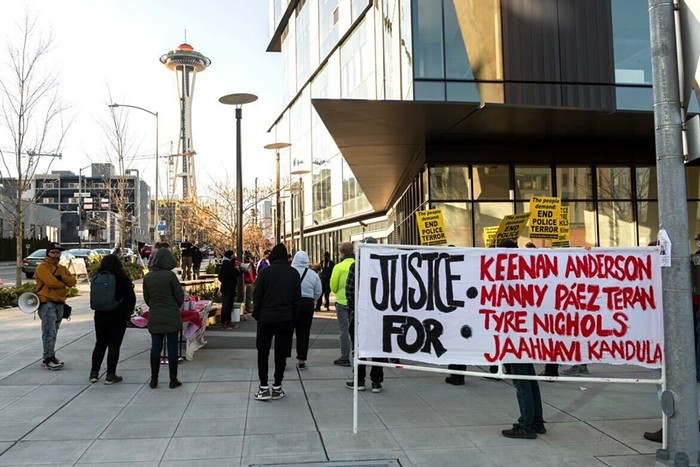 Seattle Alliance Against Racists and Political Repression were present for a rally and protest on Sunday. Streetphotojournalism 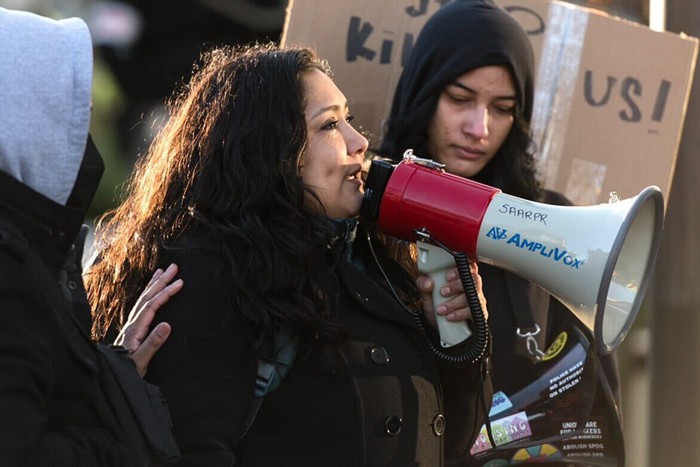 At the memorial, Victoria Pacho, a speaker from Auburn, described an encounter with Auburn police. Streetphotojournalism

Who could have predicted this? I witnessed another crash on Sunday at the intersection where SDOT blasted away a crosswalk. This time it was a car hitting a bicyclist. The stencils reading “FALSE SENSE OF SAFETY” are still visible on the pavement.

One of the scariest intersections in town. Matt Baume

Cincinnati is a real city, and Seattle isn’t. Seriously, folks, it’s not that complicated.

Holy shit what is this? There is a public market in Cincinnati that has been pedestrianized...and permits deliveries with retractable bollards?!?! pic.twitter.com/6iBpQNDjey

After reading all that, you deserve something calming. Here is a local otter having a good time.

Have fun with puzzles today - Mishka & Sekiu will too! 🧩 pic.twitter.com/laRb74zIMe