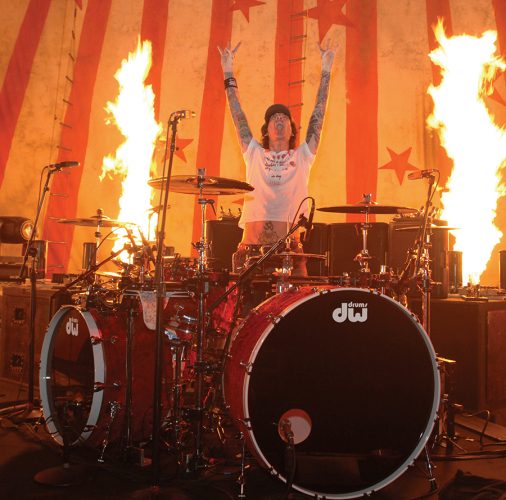 Mötley Crüe drummer Tommy Lee has signed an endorsement deal with DW Drums, the Southern California company announced today. He previously endorsed the company in the late ‘80s and ‘90s. The hard rock superstar will be playing DW drums, pedals, and hardware for the foreseeable future.

“DW is delighted to welcome back Tommy Lee to the DW Family,” the company said in a statement. He toured with his first DW kit during the Dr. Feelgood era and was featured in DW’s popular American Dream video series in the early 90s. He previously played Pearl drums, and has also been a Tama and Sonor artist in his career.

“Welcome back?” Lee said in a statement. “I never left. I just took a little journey trying some new things… I’m insanely excited about (DW) and the new gear. So stoked to share everything with ya!”

Mötley Crüe is currently enjoying a massive new audience since the release of the Netflix film “The Dirt,” a dramatized biopic of the band. A stadium tour is currently scheduled to begin this summer in Jacksonville on June 18. The tour, consisting of 31 shows, has already sold more than 1 million tickets in 25 stadiums. Joining the band on tour will be Def Leppard, Poison, and Joan Jett and the Blackhearts. As of this date there has been no official announcement on whether the tour will take place as scheduled, though many other big acts have cancelled or postponed their summer tours, including Green Day and Bon Jovi.

In November last year, the band destroyed the “cessation of touring agreement” that each of the four members signed in 2014 to kick off their “farewell tour.”

Tommy Lee is one of the most entertaining drummers in rock. His famous gravity defying drums solos, including the famous roller coaster, have inspired many drummers from bar bands to metal’s biggest names. Lee’s drumming helped define and power the pulsating heartbeat of Mötley Crüe, and his hard-living, rockstar persona and high-profile social life propelled him to become a pop culture, household name.

For anyone looking for that ’90s nostalgia fix: