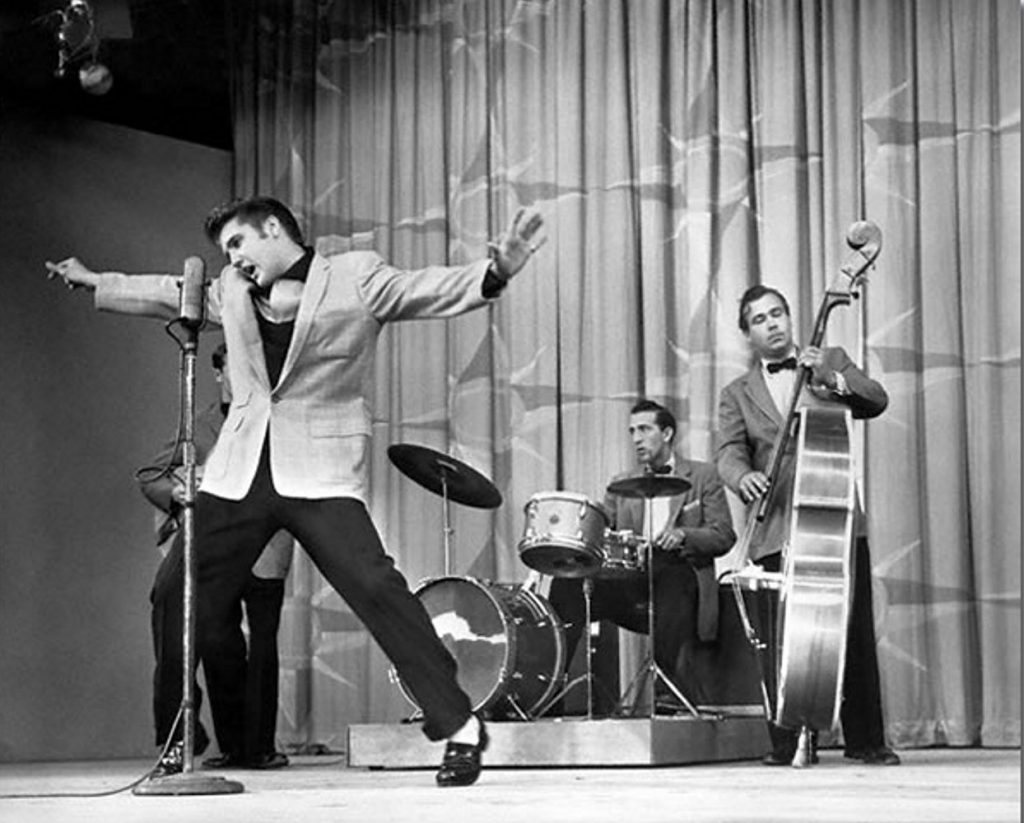 Rock and roll began as a fusion of R&B chord patterns, boogie-woogie piano rhythms, and a strong backbeat, which made the music exciting and danceable, from artists like Little Richard, Elvis Presley, Chuck Berry, Fats Domino, and many others. Some artists mixed popular country influences with R&B, creating what was later dubbed rocka­billy. But this music was more than rhythms and chord progressions. Culturally, it marked the beginning of the slow change in race relations in the United States and the gradual ac­ceptance of minorities by the white majority, first as athletes and entertainers. In this era, the music was often recorded directly to acetate, which forced the musicians to get it right on the first take. Let’s take a look at some of the drum parts that launched a musical revolution.

This was one of Berry’s many hit songs and its intro has carved it­self into our collective con­sciousness. It was on “Johnny B. Goode” that Berry first employed the new studio technique of overdubbing to record the guitar solos. Fred Below recorded the drums on many of Berry’s Chess Records hits, and like much of the music from this era, this song has a light swing that falls somewhere between a sixteenth-note and a triplet feel.

“Rock Around The Clock”

This classic slice of Americana was one of the very first rock and roll hits, and it features an interesting drum part—or a couple of them. The intro section has unison hits on the snare drum with the rhythm section. During the body of the song there appears to be a couple of simultaneous drum parts—one playing a shuffle on the rim of a drum (notated on the high tom rim) and the snare kicks, and the other playing the hi-hat—though it’s possible one drummer played the entire part. Session drummer Billy Gussak was used for the recording of this track instead of Haley’s regular drummer, Dick Richards. The bass drum (if played during the recording) is inaudible in this section, though could be played on counts 1 and 3 or on all the downbeats. The hi-hat part gets busier later in the song, and was probably played with a stick, though I wrote it here for drummers who want to test their left foot coordination.

Rock Around The Clock

This song was one of rock’s first hits that also performed well on pop, country, and R&B charts, and was the first Sun release to sell a million copies. Out of friendship, Elvis delayed the release of his version until after Perkins’ original single had peaked on the charts. The beginning of this song has some 6/4 measures, which, according to drummer W. S. “Fluke” Holland, were the result of the band’s inexperience rather than an intentional compositional choice. The breaks later in the song revert to 4/4. Fluke went on to join Johnny Cash for a two-week tour, which lasted for the next 40 years. He also recorded all of Cash’s hits and was the first drummer to play a full set of drums at the Grand Ole Opry. We’ve notated the rim part as a tom rim, though it might have been played on the snare rim. If there was a bass drum part, it isn’t audible.

Elvis Presley was known together, for fusing R&B and country but this song is pure rock and roll. However, if you’re only familiar with Junkie XL’s remix of the song you’ve missed out on funky drum fill that kicks off this a cool track. The fill may sound little odd since it starts on beat 2—the sticking used was probably RL LR RL LR. The song has a boogaloo groove that’s got a nice little ghost note on the e of 2. The tasty fill in the third measure uses an RRL RRL sticking. DJ Fontana was Elvis’ drummer for 14 years and recorded well over 400 songs with The King, including this one.

Jerry Lee Lewis was one of early rock’s most dynamic and mixed scandalous performers, who mixed boogie-woogie, R&B, and gospel music to create his exciting and raucous songs. He was kicked out of Bible school for playing the Devil’s music, so it shouldn’t come as a surprise that his hit, “Great Balls Of Fire,” was considered blasphemous when it was released. There actually are only two instruments in addition to the vocals on this recording: Lewis’ piano, and the great drumming of J.M. Van Eaton, who was one of Sun Records’ session drummers and played with may musicians of the era, including Johnny Cash and Roy Orbison. It has a straight-ahead rock and roll groove and memorable intro that’s worth checking out. The snare notes sound like he was hitting the rim of the drum instead of the head.

This tribal groove is based on a Latin 3:2 clave, which, as many of you know, is a rhythmic pattern whose accents fall on the 1 (2) & 4, 2 3. The original recording is of very poor quality and I can’t make out a bass drum part at all, but was a bit surprised to detect the two-tom melody that is usually ignored. Drummers often play the classic groove on the floor tom and play either the clave pattern or straight quarter-notes on the bass drum. It can also be played as N’awlins second-line groove on the snare drum with rudimental flourishes. Unfortunately, I couldn’t source the original drummer from the 1955 session. [EDITOR’S NOTE: It appears the drummer who first recorded this beat with Diddley was Clifton James.]

Most drummers don’t know that to John Bonham based his intro to Led Zeppelin’s “Rock And Roll” very, very closely—or perhaps just plain stole it—from Charles Connor‘s intro to Little Richard‘s song “Keep A Knockin’.” Like “Rock And Roll,” the intro is all beat in 4/4, and starts on the & of beat 3, though some drummers prefer to think of it starting or ending with a measure of 3/8. It definitely helps to count it out. If you listen to the two songs back to back, there are subtle differences, but it’s obvious that Connor’s stellar drumming made a huge impact on Bonzo.

This song’s funky intro will get your toes tapping and Earl Palmer‘s two-handed snare RLRL groove is another great drum pattern every drummer should know. The handclaps on the counts 2 and 4 keep the feel upbeat and moving. He plays this as a variation of a train beat with a light swing and a syncopated bass drum note on the ah of beat 2 in every other measure, which makes his groove ever-so-funky.

“Ain’t That A Shame”

You might be more familiar with Cheap Trick’s remake of this early rock hit than the 1955 original, but Fats’ voice and superb piano playing, coupled with the deep pocket of Earl Palmer‘s drumming, made this song a classic.

Ain’t That A Shame

Buddy Holly And The Crickets

Drummer Jerry Allison suggested a new title for this song, which was originally titled “Cindy Lou” and also offered an unusual and signature sixteenth-note tom-tom groove that helped the song stand apart from other songs on the radio. More than a drummer, Allison cowrote “Peggy Sue,” “That’ll Be The Day,” “Not Fade Away,” and “More Than I Can Say,” though the band’s manager altered the songwriting credits. Years later, the drummer married Peggy Sue Gerron, the high school sophomore the song was named after. Allison never changes the drum part during the song, but occasionally adds brief crescendos to this two-and­-a-half-minute tom roll.

The twist beat is a classic drum groove that features a snare pattern of three notes that fall on 2 & and 4, adding a little syncopation to the standard rock beat with backbeats on 2 and 4. Ironically, neither “The Twist” nor “Let’s Twist Again” uses that drum beat. However, Checker’s duet with Dee Dee Sharp on “Slow Twistin‘” does employ the beat the dance style is associated with it. Ellis Tollin was the creative drummer behind these slyly suggestive songs.