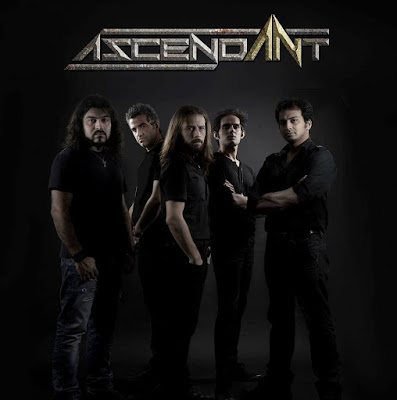 First, allow me to thank you for having me on Metality.net. We are very excited to perform for the first time at Metal Mania II with great bands like Voice of the Soul from Lebanon, AKB from Dubai and Steel Engraved from Germany. This show also marks our return after being far for a very long time off the stage, due to recording our debut album and other circumstances.

2.     You guys usually perform a lot! Do you have pre-show rituals to prepare you and keep you pumped?

Well, we haven't performed since early 2015, and that's why Metal Mania II is important for us. I have personally been performing for many years on big stages with many bands, which has allowed me to gain amazing experience and self-confidence on and off-stage. Of course, warm-ups are due before any show will help me to be pumped and ready to rock, and as Ascendant we already have the great harmony between the band members and that’s helps us to rock the stage.

3.     What’s your favorite Ascendant song to perform live and why?

My two favorite songs to perform live, are:
"Walls between us", because of the drumming and "Fog of war" because of the story/message behind the song.

4.     You’ve been involved in both Syria’s and Dubai’s metal scenes. What makes them different?

I’ve been in Dubai for almost 4 years and I can say that Dubai is the best place in Middle East to have the opportunity to meet metalheads from different nationalities. As a person who likes to socialize, it gives me the chance to interact with local musicians who come from all over the world, as well as the chance to open for international metal bands when they perform in Dubai. Needless to say though that the scene is still somehow limited compared with the activities held.
In Syria, the Metal scene was quite big in the late 90’s and early 2000. My last show was in 2007 with The Hourglass in Aleppo, after which no metal concerts were organized. And recently due the war, many Metal heads left the country but still some underground metal gigs are happening in calm cities like Lattakia.


5.  Ascendant released a couple of songs, False Illusion and Fog of War. When will we expect an EP or album?

False Illusion was our first single released in 2013 on our YouTube channel recorded live at The Mix studio and Fog of War was our first demo recorded in different studios and released in 2014.
The band already finished recording 8 tracks and we are in the mixing process. Release date will be early 2017.

7. Any final words for Metality’s readers and those attending Metal Mania II?

Stay tuned for updates on the album launch date! We promise you a special night to be remembered. Meanwhile, see you at Metal Mania II at Music Room. We will be performing a new song never played live before.