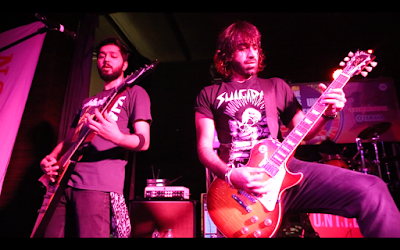 Our editor-in-chief Kareem C had a chat with the UAE and Qatar-based musician Naser Mestarihi about his band and their latest album, Praed Street.

Naser: It’s going pretty good so far, we’ve just played our last show for the year and we’re kicking back during the winter break to recharge and prepare for the release of some new singles and more activity in 2017.

Critically we’ve gotten a lot of positive feedback from the press, fellow musicians and our supporters. During the summer the album ranked 9th in best selling records by a UAE music act so I’m very pleased with response so far but we’ve still got more work to do to get the music out there to those who haven’t hear it yet.

Let’s talk about your second LP, Praed Street. What would you say is the biggest difference between that and 1987, or your self-titled EP?

Praed Street’s a major departure in terms of song structures and styles incorporated on the new record. For instance, there are more mid-tempo grooves, acoustic guitars, I took a different approach on the leads, less frantic shredding and more focus on getting some feel in there. i channeled my Michael Schenker influence on this for sure to give the leads more soul, it’s still got some shred but i wanted the leads to be meaningful. My love for metal music is also prevalent on the record on tunes like Fire, Birmingham Kiss and Prevail.

The production on this is also something I’m proud of, it was mixed and mastered at Hertz Studio, the Wieslawski brothers did a fantastic job and also I got to give Cobus some credit for his incredible drumming on the record.

What was the writing production process like? How did it differ from previous releases?

The writing process was much more relaxed, I wrote half the record in London and the other half out here. I then sent the music tracked, demos with guide tracks over to Cobus in LA who wrote the drums in a matter of weeks.

There were a lot of spur of the moment ideas that i would come up with during tracking sessions in the studio and working with my producer Bader Al Sada was liberating cause he’s a musician too so he would be very supportive with picking the best licks or vocal parts.

You’ve played a couple of shows so far. How’s that been? When and where are the other shows scheduled?

We actually just played our fifth show of the year a couple of weeks ago. The response at every show, well most shows, has been incredible, especially considering that the setlist predominantly features tunes off Praed street, which the audiences seem to really dig. We are currently working on scheduling shows, our focus now is to play in other parts of the Middle East region, fingers crossed if we can work it out with our peers we hope to get something rolling in 2017.

Do you have a favorite song off Praed Street? If so, what is it, and why?

It’s definitely a battle between Winterburn and Birmingham Kiss. The former encompasses all my musical styles, it also discusses a topic I guess everyone can relate to and I hope will help people who are down on their luck feel empowered.

Birmingham Kiss is a tribute to Sabbath and musically is just so much fun to play. it’s the only song I’ve written that doesn’t have any solos, I went for powerful grooves, I wanted a song that had a riff o’ rama vibe with a lot of cool interludes.

Your bandmates are not based in Doha - how do you guys practice before shows? Do you do a quick run of your set a couple of times before the night of your show? It seems to be more common among bands, because it’s hard to have everyone live in the same place these days.

It ain’t easy man, I fly out to Dubai to rehearse so we usually have around two rehearsals right before shows but the guys (Vivian and Ziad) are total pros and we tend to nail song after song during rehearsals.

Our setlist has expanded to around an hour and a half so we got a bunch of material to pick and choose from so it’s great to know I can rely on my boys to get the songs and be right in the pocket whenever I’m back in town. 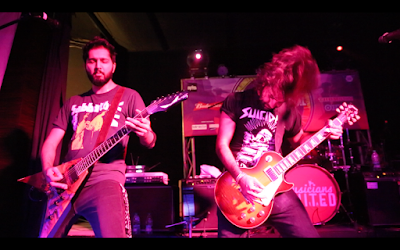 What’s Doha’s music scene like? Nervecell played there several years ago, but we never got a full glimpse of whether there are many local bands, club venues…etc. What’s your take on it?

To be quite honest the band’s based in Dubai and most of our activity is focused on doing stuff there. We don’t really focus on the Doha scene.

What have you been listening to lately? Any favorite albums of 2016?

Ah man, tons of records. Currently I’ve got everything from Zappa, The Allman Brothers to Night Demon playing.

I’d say my favourite records of 2016 are definitely Hardwired to Self-Destruct, my good friends Thrown Into Exile’s Safe Inside, Spiritual Beggars’ Sunrise to Sundown, I really dug the new Ghost EP that came out this year and I’m really stoked to get the new Testament record.

Other than music, what have you been up to?

Just working out, trying to stay in good shape and being healthy and long boarding haha.

What’s the most important advice you’d give to a young musician trying to improve on their instrument and perhaps try to break into their local scenes in Doha or Dubai? They’re two scenes you are very familiar with.

The most important thing is to practice, never stop practicing, learn as many styles as possible. Explore music, buy records and embrace diverse genres, it’ll help you write and be original. Never give up no matter how bad the odds are, cause being a musician in this day and age is pretty tough regardless of where you live, just stay persistent, work hard and good things will inevitably happen.

Thanks for chatting with us, Nasser! Any final words for Metality’s readers?

It’s always a privilege, thank you.

Support independent music and I wish everyone out there a Merry Christmas and a happy holiday season!