2022 is shaping up to be the year of emo. The Emo’s Not Dead cruise has just been announced, featuring some of the biggest artists from the scene.

Read more: Artist and fans react to When We Were Young festival’s epic announcement

The Emo’s Not Dead cruise will also mark Your Broken Hero‘s live debut. Your Broken Hero is the project from musician and YouTuber Matt Cutshall. Cutshall creates emo anthems that find a perfect way to parody but also lovingly pay homage to the scene we all know and love. Take, for example, “felt emo again might delete.” The Twilight-inspired video is set to the classic scene anthem “Situations” by Escape The Fate. But that’s just one of dozens of videos from his Emo’s Not Dead project. Check out more at his YouTube here.

Fittingly, Cutshall is back with another video, this time writing a poetic journal entry about creating a perfect cruise for emo kids the world over. During the humorous clip, Cutshall asks about the cruises of yesteryear: “Where the hell were all my bands?” Maybe we finally have an answer. 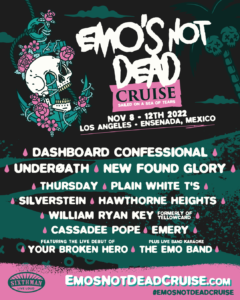 [Photo via Emo’s Not Dead]