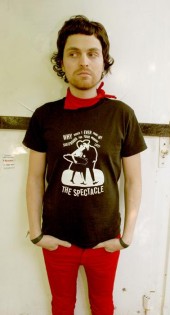 Location:
Straight Outta, NO
Type:
Artist / Band / Musician
Genre:
Pop / Indie / Alternative
Site(s):
Site
Label:
Monomegamy Music/Indie Distribution
BioConnections
Ida Maria
THOMAX
Maria Solheim
Dominic
Simon Lynge
Tungtvann
Manna
The Spectacle
Gaia Epicus
Binärpilot
Quiritatio
Raggabalder Riddim Rebels
Ingeborg Selnes
Nicolai Funch
Petter Carlsen
SCHTIMM
cold mailman
Sinnssyk Ugle
Sondre Justad
Last Ninja
Julius Androide
Beyond The Fences
Silje Halstensen
Moddi
egil olsen
Scarlet Monroe
Jimbo Jones
Cactus
Caroline Furøyen
KARLSØY PRESTEGAARD
Käthe Kollwitz
X ROCKEKLUBB
Laura
Fatuhiva
My name is Magnus Eliassen. Yeah, I know, it's not an instant hit. but it'll grow on you! You know, like those really good songs. Old classic album tracks that ain't trying to be something. They just are. Well, I don't want a name like Sunny Saturday Smiles of Broken Hearts Behind Confession Bars. You see this isn't some stupid thing I have to try to do. There is no try. I just happen to be Magnus Eliassen, and everyone else is already taken. Oh, and I have a band, with three of my best friends, and together we perform as who we are: Magnus Eliassen and The Singers and Players of Instruments. I can't believe a classic like that wasn't already taken!

I have a bad memory. When I was a kid I lived with my parents on a tiny island far up in the north of Norway, but I can hardly remember anything from those days. It feels like my life is slipping away from me. I think I was obsessed with Lego, Bruce Springsteen and bernaise sauce. I've also been told that my father bought me a Commodore 64 before I was born, but I find that hard to believe. You see, according to my birth certificate I was born in January 1981, and the C64 was launched in August 1982. Hmmm.

I guess I tend to get obsessed with stuff. Everything from collecting vinyl records to instruments and studio equipment and other pieces of useless junk. I'm done with that. Materialism and capitalism makes us exploit each other. All you really need is good health and some clothes. And love! My latest obsessions have been this health food project where I make all my food from scratch as cheap as possible and under no circumstance pay more than $1 per meal. oh, and my vintage 1966 Fender Jaguar electric guitar. Sunburst. Chrome. Tone. Mmm. So much for my anti-materialism.

I managed to stay in school for 12 years. We moved to the mainland and the small city of Bodø, I was introduced to Sepultura and Public Enemy, I became a member of a punk band and joined the DIY scene, formed a metal band and said to myself that one morning every woman and man on this planet will wake up thinking of my band, going: "Damn, those guys are amazing!" I still have ambitions, but I guess I'll have to take one continent at a time. I also became a local rap hero when I released a hip hop 12". I am pretty sure it sold like 5 copies.

Are you dreaming of northern lights, the midnight sun and polar nights? Then don't! They're all messing with your head, and I promise you that Norwegian black metal bands ain't the only ones disturbed by that inherited Scandinavian melancholy and pensiveness that we're all so morbidly fascinated by. A quite bad car crash put an end to my depression. I had to push the reset button, and decided to live every day to the fullest, to stop doing drugs, and to appreciate food, the wonderful fjords, nature and the second chance I'd been given. I still love Nick Drake and Jeff Buckley with all my heart, but lately I've felt more kinship with the direct messages and positive vibes of Cat Stevens and Bob Marley. You've probably heard the rest of the story before: Boy meets girl, boy falls in love, girl is not sure what she wants, boy writes 11 love songs in one week and spends two years in his grandma and grandpa's house performing, recording and producing a self-released "concept album about the sunny sides of love, and the feeling of being vulnerable and invincible at the same time when discovering true love and belief in the meaning of life" which he calls Second Grace. Girl loves the album, but is still not sure about the boy.

My mother says I must find myself a place to stay, that I cannot go on living like a careless hobo. I don't want to break my mother's heart, but I am perfectly happy with things the way they are. In fact this last year has been the most fantastic ever: I have done over 100 concerts, toured and seen some of the most beautiful European cities, played in L.A., ridden roller coasters for the first time, and collaborated with the crazy hip hoppers in Tungtvann and the rasta elders in my favourite reggae band, Manna. Selling out shows is a freaking thrill! 6000 people showed up one night! Another night I drew six people. three of them were journalists. In 2006 I also sold out the Norwegian edition of my album and won a couple of prizes.

Not all roads lead to Rome. One leads out of Babylon. Just take the steering wheel, hold it steady, roll the window down, enjoy life and keep making people happy. I'm still up for more of that. I'm still taking my time to perfect DIY, and I've still got love for the streets. Besides, after that car crash, everything feels like a bonus, be it a new day, a new song, or a couple of continents. I am proud of my family name. Just give it a chance. It'll grow on you.

Until we meet again. Magnus

Watch the "Write Back" music video!

Watch the "2 uka" music video I did with Tungtvann!

The new edition of Second Grace is out now! You can find It's A Trap's nice album review in English here. American, European and International customers can buy it directly from me, or from the fantastic US store CD Baby (where you also can listen to all of the songs).

Songs are also available as digital downloads in the iTunes Music Store, and in

In Norway you can find my album in the local record shop or at cdon.com, freerecordshop.no and platekompaniet.no. Second Grace can also be found at Amoeba Music in Hollywood, California.

If you for one, some or any reason do not want to buy the album yet, but still would like to check it out, you should know that I am a supporter of "try before you buy" or "keep listening even though you are unable to buy" through file sharing, and that I believe the most important thing with what I am doing is that the music is being heard.

Support the revolution: I am an independent artist currently looking for distribution, booking and radio airplay in Africa, Asia, Oceania, Europe, Americas and the rest of the world. If you are interested and think you can help, get in touch! Thanks!