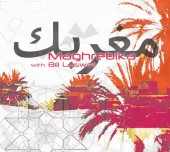 This is what happens when a bunch of Algerian immigrants, musicians and singers living in Switzerland, do cross the path of people from Barraka El Farnatshi Prod. Abdelkader Belkacem and Abdelaziz Lamari, both from Oran - Algeria, the capital of Rai music, were invited by Pat Jabbar to contribute some vocal parts to two tracks (“Babour” & “El Baqara”) for a solo project which should have been called Abdeljabbar. The easy-going work at the studio during the recordings as the same general interests and musical taste, pushed them to work together on a whole album, which finally became Maghrebika. After the great experience on Azzddine with Bill Laswell, it was nearly obligatory to have again no other bass sound than the one from the Master himself. From the ten tracks that got sent to New York, ten crucial and tremendous bass lines to all the ten songs have been sent back. Every Maghrebika member was completely astonished to see how the whole sound with the freshly added bass lines changed. There are so many details and small solos in Bill’s work, that a listener has the choice to listen either to the complete song or just to concentrate on the perfection of the bass itself. Sometimes it comes in a heavy Dub-like style, sometimes in a floating jazzy way. Sometimes the bass is as furious as the lyrics and creates a tension that it will blow your mind. Sometimes the sound comes gentle and smooth. In any case “Neftakhir” is a bass album. Back in Marrakech, summer 2006, Pat Jabbar met again by accident “old friend” Aziza El Marrakchia, who was a longtime neighbour, living also in the old medina. Her Shikhat combo

B-Net Marrakech became famous after some contributions for Rachid Taha, DAR BEIDA 04 and Cheb I Sabbah. With her new band line-up they went to the studio of Youssef El Mejjad of Amira Saqati to record some vocals that are well reflecting the rough side of a Shikhat’s life and in the same moment do perfectly represent the content of Maghrebika’s lyrics. The main subjects of the songs are the actual problems in the Islamic world: the neverending prejudices against Muslims since 9/11, Islamophobia in general, the caricatural provocations of Muslims either by journalists or a pope etc., social injustices and corruption in Muslim countries, the division “Fitna” of the Muslim community created by the media and the US propaganda as the anti-islamic manipulations of the Bush administration, the fight for the liberation of Palestine, Iraq, Afghanistan, Lebanon, etc. The main title “Neftakhir” (pride) is a message to the young Muslim diaspora, telling them to be proud of their roots, culture, moral values and religion, as to reject a forced westernization. Maghrebika stands for a pacific Islamism and is vehemently against the use of violence and terror. For booking and interviews, contact Barraka now !!!

As an appetizer listen to previously unreleased mixes on:

I edited my profile with Thomas' Myspace Editor V4.4

NEW TRACKS AND REMIXES BY: