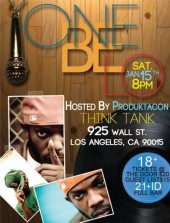 With the level of respect among peers, the adoration of fans all over the world, the support of various activists, grassroots organizations and schools throughtout. One Be Lo's universal appeal and unforgetable voice will continue to be heard for a long time.

One Be Lo, Tableek & DJ Twelvz Feat. Zumbi of Zion I "Connected"

One Be Lo - Destiny

One Be Lo - What Time Is It

One Be Lo - Alphabet Soup

One Be Lo - Cold World
▶ View All Videos