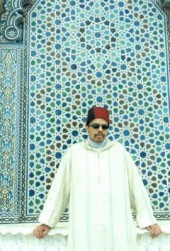 Location:
Rabat, Switzerland, MA
Type:
Artist / Band / Musician
Genre:
Electronica
Site(s):
Site
Label:
Barraka El Farnatshi Prod.
Type:
Indie
BioConnections
Natacha Atlas
Rachid Taha
MAGHREBIKA
Amira Saqati
DAR BEIDA 04
DJ Phil Meadley
DAR BEIDA 04
Nearly all Barraka releases have been developed out of direct relations around the big family of Aisha Kandishas Jarring Effects or out of accidently acquaintances in the Moroccan musician/studio scene. Only a very few albums have been released by the classical A&R-way of an incoming demo or pre-production (Baroudi, Maniacs/Sharkiat, Hypnotix). The same approach was the beginning of a long working period, leading to the album Massafat (interval). One day, a noisy, dirty and unlistenable tape recording from a live show in Rabat, was among the many demos . But even if the soundquality of the recording was maybe the worst we ever recieved, there was a from far distinguishable beauty and dynamic in its music. This tape came from Azzddine Ouhnine, an Oud player and composer, blind since his childhood, coming straight out of Rabat, the capital of the Kingdom of Morocco. After listening to the first two tracks, the decision was taken. We had to realise an album together for Barraka Prod.

At that time, hard-disk recording studios were not very easy to find yet in Morocco, so 24 track tapes were brought to Rabat, with the intention to record Azzddines whole orchestra (15 musicians) at a later moment of 2002. In the meantime, the overmotivated orchestra, managed to record some tracks themselfs at the studio of Les Frères Megri (a very famous Moroccan singer & song writer band à la Bob Dylan in the late 70s, from which Boney M./F. Farian stole some music to make their hit children of paradise and by loosing the lawsuit, helped to bring a lot of cash to the original composers.). Unfortunately, these recordings have been made so fast and without synchronization, that only two tracks with the whole orchestra could make it on the actual album (tracks 6 and 12).

Finally a few month later, the rest of the tracks were recorded on a Pro-Tools system in Casablanca, but with only five musicians. Back at the secret laboratory, the programming and the production was growing fast until the point was reached of choosing the basslines and their sounds. Nothing happened anymore, it was the complete stagnation ! Synthetic bass sounds would not have given what the music needed. And bassplayers in Morocco are as difficult to find as Kanunplayers in Europe. So Bill Laswell was asked, if he could play maybe a bassline to one or two tracks from a selection of ten songs. One week later, we got a cd back from NYC with eight incredible and groovy basslines to eight tracks from the master himself ! Some Moroccan friends as the band said, that he must have Arabic ancestors somewhere. Its not possible to put that much soul and subtlety in the music without having at least some spiritual connections.

Even if the album Massafat seems to be quite homogeneous, it represents on the other hand the variety of the Moroccan traditional folk music. The track Britou, which means do you want? is inspired by the melodies and the monotonous beats from the Moroccan Southern Sahara. Boualem, 17 years old Algerian rapper, layed perfectly his funny-aggressive lyrics and flow, in a typical banlieu-French (spoken in the multicultural suburbs around the big cities of France), over the song. and Azzddine asks do you want it once or do you want it twice ?.! Ya Nass (folks), is a High-Atlas-Berber influenced dub track with a bluesy touch. Rozali (my love, my beauty) comes more with a particular Gulf-region flavour, as the remix with Bombax Goa Rozali in a full on the floor Psy Trance stylee (could be an appetizer for the next DAR BEIDA 04 album, which is a pure Arabic Goa/Psy brainticket). Both songs

Takassim (improvisation) and Ana Ou Enta (me and you), were recorded as freestyle improvisations and one does feat. Cheb Youssef from Amira Saqati with his powerful voice. All other tracks are a sort of Shabee-Melhoune crossover, sometimes Chill Out and Lounge like, sometimes more Oriental Space floor and do somehow represent the new School of the modern Moroccan song.

NEW TRACKS AND REMIXES BY: