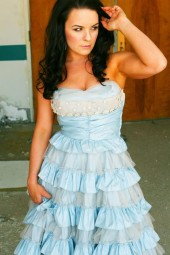 WHAT I WANT YOU TO KNOW ABOUT ME: My family, friends and dogs come first. I am more than slightly obsessed with my three dogs, Bruiser, Bailey & Mia. At some point, you'll get sick of hearing about them, but try to bear with me- I don't have kids to brag about yet! I love traveling, but I am terrified of being on planes (though I fly constantly). So if you ever get stuck sitting next to me on a flight, you may want to request a seat change before take-off. I love painting and photography. I get easily embarassed. I hate being late. I hate when other people are late. Cooking is my therapy. My Grandmother (my Dad's Mom) was the greatest influence in my life. I love good friends, good conversation, good food, and good wine.usually all at once, and not necessarily in that order. I'm a hopeless romantic. I think TIVO is the best invention since my discovery of the Starbucks iced venti, non-fat, three pump hazelnut, latte. (Yes, I'm one of THOSE people- but if you want to know the quickest way into my heart, surprise me with one of those. the Starbucks drink. Not the TIVO.) I am oddly fascinated by serial killers and the psychology behind what drives them. Be afraid. Be very afraid. I miss the TV shows from the 80's. I don't miss the big hair and purple spandex pants. My inner child is four years old. I've had my heart broken, but I would do it all over again. And again after that. I try not to hold back on anything- my faith, my loyalty, my friendship, my heart, my words. the latter of which you must already know since you're still reading. Little things make me happy: sushi for lunch, pajamas right out of the dryer, singing my heart out while I drive, playing Scrabble, a good old-fashioned thunderstorm, Connecticut in the Fall, New York City at Christmas, random acts of kindness, Bruiser when he's grumpy (and boy, does he get grumpy.), watching "Clue" or "Waiting For Guffman" for the thousandth time, laughing until I cry. Oh, and one last thing about me. I'm long winded. Obviously.

~~~~~~~~~~~~~~~~~~~~~~~~~WHAT MY MANAGER WANTS YOU TO KNOW ABOUT ME: Jenna von Oy began her professional acting career at the age of six, when she landed her first big break in a Jell-O Pudding Pop commercial with Bill Cosby. Since then, her twenty-five year career has been in high gear. Von Oy has made her mark in television,having been a series regular on three network sit-coms. The first, "Lenny", aired on CBS for one season. She followed it immediately with NBC's "Blossom", where she portrayed the title character's fast-talking best friend, "Six LeMeure". This was the first of two long running hit shows that von Oy has starred in, both having exceeded one hundred episodes, and entered into syndication. The second, UPN's "The Parkers", finished filming in 2004 after it's five year run, and was the number one television show in African-American households. Here, von Oy played the quirky and sarcastic "Stevie Van Lowe". Von Oy is an accomplished singer, and has just released her debut CD "Breathing Room" (September 2007)

Frans - If I Were Sorry

To The Most High; Demo Delgado & Ken L.(Praises To JAH)

Eminem - Without Me (Official Music Video)
▶ View All Videos