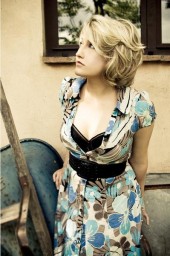 Location:
NASHVILLE, US
Type:
Artist / Band / Musician
Genre:
Country / Pop
Site(s):
Site
Label:
Independent
Type:
Major
BioConnections
Kenny Chesney
Jason Aldean
The Wreckers
Miranda Lambert
Emerson Drive
Trisha Yearwood
Emily West
Jenna von Oy
Brooke Ludwick
Paul Gordon
Growing up in a small town in Washington , Lila started singing at the age of four with her Dad's band. The first song she learned and performed was "You Are My Sunshine". At age 15, Lila was a full time high school student and a member of the cheerleading squad, when along came her first record deal and her first smash hit Down Came A Blackbird following a few months later.

Juggling a successful music career and the demands of being a teenager wasn't easy. Not wanting to miss out on being a teenager, Lila decided to stick with school and sing on the weekends. In 1998, George Strait asked her to be a part of the first George Strait Country Music Festival tour with other artists such as Tim McGraw and Faith Hill.

Lila released her sophomore album Something In The Air in March of 1999, yielding a top five hit with With You. In February of 2001, Lila's debut album Lila went platinum. A pretty impressive feat for a then 19-year-old in the music business. A few months later she released her third album. Complete, proved that this determined and poised young woman was answering her true calling.

Lila has certainly evolved from a Tacoma , Washington high school student to a confident, 26-year-old independent woman. She moved to Los Angeles where she lived, busy piloting her own career. Lila decided to move to Nashville where she felt more at home with her music. "I've never had the opportunity to fully concentrate on my music before," Lila admits. "During my high school years, I had to pick: do I want to go to the prom or do I want to go do a show somewhere?'

Although Lila is the first to admit she surrounds herself with great advisors, she took the reins on Complete, from choosing a producer and song selection to picking the studio musicians that would create the sound she was looking for.

Lila's goal is to make great music and be a successful artist for many more years to come. And, of course, to always keep the fans happy.

Lila holds her confidence and belief that each day is a gift, and she has the power to create her own destiny. "Life deals you all types of cards and you never know what's going to happen", Lila says. "I think if you're true to yourself and surround yourself with good people and always take care of the people close to you, the good karma will always come back to you. Its so easy to must be nice to people and have fun with your life and enjoy it. And that's what I intend to do."

Lila McCann isn't just another pretty face in Country music. With hits like "Down Came A Blackbird", "I Wanna Fall In Love", and "With You", as well as platinum and gold selling albums under her belt, it looks like Lila will be making hits for a long time to come.

Almost Over You Lyrics by Lila McCann

Lila McCann - Down Came A Blackbird With Lyrics

Lila McCann - Down Came a Blackbird

Almost Over You - Lila Mccann (Lyrics in discription)