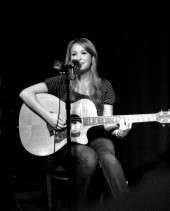 My first full length cd is offically out and you can order it on my website www.marlasmusic.com or cdbaby.com

i'm super psyched about my new record so please support and spread the word!!!xoxo

Many of you may know Marla Sokoloff from her work as an actress in various films and television shows. For 6 years she spent Sunday evenings in our homes playing Lucy Hatcher on the Emmy award winning legal drama "The Practice." She also has appeared in many cult classic films including "Dude Wheres My Car?" as well as "Sugar and Spice." Most recently she played the innocent nanny Claire, who got fired for tempting her boss on "Desperate Housewives."

But what you may not know is that Marla is also an accomplished singer/songwriter.

Before you judge. just know that she finds the actress turned singer thing just as annoying as you do. It seems like every time we turn around some young starlet is debuting their video on TRL. Who knows how they find the time to do that and promote their clothing & perfume lines?

Marla Sokoloff is hoping you can make room for one more convert. The good news is that there is no clothing line and no stinky perfume. But she cant promise that there wont be any "stolen" sex tapes.

Growing up in San Francisco, she was heavily influenced by the sounds of Stevie Nicks And Carole King. She was also influenced by real life experiences such as her breakup with a long-term boyfriend, which she reveals in songs such as "Im Done" and "Call Me Crazy." Unlike those other entrepreneurs, Marla co-writes all her music and has been playing guitar for over 10 years.

She lives in LA with her dog Coco (Chanel not Cox-Arquette) and spends her days making music and sewing guitar straps.

Marla Sokoloff - Turn on Me