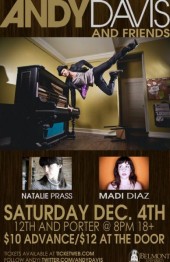 A Louisiana native, Davis released his first album, “Thinks of Her,” in 2004. “Thinks of Her” struck a chord on college campuses, selling out its initial print run. The original pressing of the CD -- with Davis’s hand-written lyrics and stenciled cover art -- became a collector’s item within months of its release.

In 2005, the remastered rerelease of “Thinks of Her” gained Davis national exposure and brought him to the attention of legendary music producer Mitchell Froom (Paul McCartney, Sheryl Crow, Elvis Costello). The result of their collaboration was “Let the Woman,” a sophisticated, sonically adventurous album that ignited a bidding war. Barnes and Noble won the exclusive rights to distribute “Let the Woman” online and and in their stores all over the world. The album’s single, “Brown Eyes,” became a staple on AAA radio stations nationwide, and “Let the Woman” became a #4 bestseller.

Davis toured extensively in support of “Let the Woman”, both headlining and opening for Colbie Caliat, Jakob Dylan, Mat Kearney, Will Hoge, Howie Day, and NEEDTOBREATHE.

The following year, Davis became a prominent member of Ten Out of Tenn, a critically acclaimed collective of Nashville singer/songwriters who joined forces for a collaborative tour that was documented in the award-winning documentary film, “Any Day Now.”

In 2009, Davis returned to Nashville to record his latest EP, “New History,” which was featured in -- and inspired -- a recent episode of ABC’s “Grey’s Anatomy.”

A thoroughly contemporary artist raised on old-school rock and soul, Andy Davis’s infallible ear for hooks -- for a well-turned phrase -- and for the often irregular heartbeat of human relationships continues to engage longtime fans and win him new ones.

Andy Davis - We Were Just Kids | Sofar Fort Worth