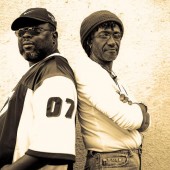 Theirs is the ultimate musical marriage, a partnership that, once formed, re-etched the very landscape of not just Jamaican music, but the entire world's. Not only are Sly and Robbie Reggae's most prolific and long lasting production team, they are the most prolific recording artists ever. One estimate is that they have played on or produced some 200,000 songs, considering that some of their riddims such as "Revolution" have been used on over 100 songs.
The powerhouse duo has produced and worked along side artists such as:
Bob Marley, Black Uhuru, Peter Tosh, Sting, Grace Jones, Madonna, Britney Spears, Sinead O’Connor, Rolling Stones, Bob Dylan, Ben Harper, Simply Red, Joe Cocker, No Doubt, Paul McCartney, Britney Spears, Michael Franti and so many others!

Sly and Robbie: Drum & Bass Strip to the Bone By Howie B [Full Album]