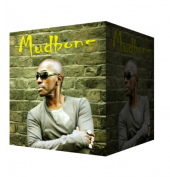 The man with a distinctive style and creativity behind many of the major P-Funk hits. This multi-platinum selling artist in his own right is the person that some of the biggest names in the history of “Modern Music” turn to for inspiration.

"I’d Rather Be With You”, co-written by Mudbone and originally recorded with Bootsy Collins, happens to be one of Mudbone’s biggest selling records, and one of the most sampled songs of all times. This song has been sampled by the likes of Dr Dre, Beyoncé Knowles, Snoop Dogg, Sugababes, Adina Howard and countless others, proving to be a milestone in the history of funk music and a major cornerstone in hip hop.

His amazing skills lead him to deliver the classic beat and backing vocals on the mega P-Funk hit “Atomic Dog”, setting new standards for countless rappers and hip hoppers including Dr Dre.

“Let’s Go All The Way,” the debut single from Sly Fox (written and performed by Mudbone), was a straight up multi-million seller, and so far ahead of its time that even today the song is still sampled, leaving many wondering how those sounds were ever created.

Mudbone has also collaborated with many of the world's leading artists, including Mick Jagger, Keith Richards, Prince, Dave Stewart, Bob Dylan, Bono (U2), Brian May (Queen), Jimmy Cliff, The Ramones, just to name a few.

He co-wrote “Freedom’s Coming” with Dave Stewart (of Eurythmics fame) to raise money for the Nelson Mandela Foundation for the fight against HIV/AIDS in South Africa.

Also, he has written, produced and performed music for major films, TV series and commercials, writing and co-writing the music for the popular French cartoon series “Funky Cops”. His most recent success was writing and performing on the Paramount Pictures soundtrack for the film “Alfie", starring British Film star Jude Law.

MUDBONE, THE MAN THAT FUNKED UP GEORGE CLINTON'S P-FUNK.

AND MANY OTHERS INCLUDING DAVE STEWART, MICK JAGGER, SNOOP DOGG, P!NK TO BEYONCE IS BACK WITH A BITE!!

SO WATCH YOUR BACK, YOU COULD BE NEXT!!!

"FRESH MUD" Produced by Dave Stewart & Mudbone, this collector’s choice CD features Nadirah X and special guest performances by Candy Dulfer, Jools Holland and Bob Dylan. Be sure to add this fresh musical experience to your collection today! To purchase and hear more go to or AMAZON

See critics comments and reviews below:

"Mudbone has that essential ability to go beyond entertaining a crowd, instead managing to render them awestruck"

Blues Matter "THIS is where gospel, blues, hard rock and hiphop fuel a fantastic mix of these elements bubbling into what amounts to an exorcism for Mudbone"

Daily Record “a bone crushing and brilliant fusion of genres”

Uncut “a rollicking affair that mashes up blues with funk, hip hop and gospel”

Telegraph “a sparkling modern record, rooted in blues but never hidebound by tradition”

"Fresh Mud blends Muddy's blues with rap (it features JA rap star Nadira X), hip hop, gospel, rock, old time soul grooves and a liberal helping of P-Funk riffing and raucousness. It's modern, it's traditional, it's cultural, it's experimental and it's moved all of it's component music along considerably".

"Muddy, I have worked with quite a few artists over the years. From George Benson to Usher - Kylie Minogue to Sandi Thom - Motorhead to The Dead Kennedys!!! As a live performer you're up there with the best of them"!

"BBC's radio producers & competition winners from Radio 2 and 6 Music were out of their seats with enthusiasm for you. They love your sound"!