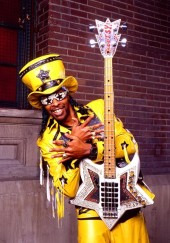 Tag(s):
Bassist
Location:
CINCINNATI, US
Type:
Artist / Band / Musician
Genre:
Funk / Hip Hop / Classical - Opera and Vocal
Site(s):
Site
Label:
Bootzilla-Tha-Monster-Records
Type:
Major
BioConnections
Twista
Juvenile
Sade
Jimi Hendrix Legacy
Bernie Worrell
Sly Stone
Blackbyrd McKnight
Keishera
FREEKBASS
D-jizzle
Maceo Parker Tribute
Ouiwey Collins
The Clyde Stubblefield Band
piakhan
Cordell (Boogie) Mosson
CandiKane
Ray Davis
Oct.26th. Bootsy was born in Cincinnati Ohio, where he became a staff musician at King Records by the time he was 15. He then toured the world with Hank Ballard, & Marva Whitney. Then the hardest working man in show business Mr. James Brown
put out a Boot-Singnal and Bootsy and his band of funkymen went off to become the Original JB's. After being talk the one from the Godfather, Bootsy then went on to play with George Clinton, Parliament Funkadelic, and also fronted his own band named: Bootsy's Rubber Band. He then met Bill Laswell, and recorded with lots of Artist like Herbie Hancock, Keith Richards, Cyndie Lauper, Ice Cube, Africa Bambaataa, and then he recieved a video in the mail in 1991 and it was from a guy with a Bucket on his head who called himself BucketHead, Bootsy told the Total Psycho to come on in and they Recorded Bucketheads first Album called: BucketHeadLand, that was Bootsy's first studio and the first time he stayed in the woods with a Cereal Killer. Right after that Dee-lite sends a Boot-signal in the sky and Bootsy answered, then they recorded: "Groove is in the Heart" Bootsy says, those were some of his best times in life other than traveling across country in a station wagon full of Funkadelic's and Lady Freaks wanting to ride along just for the funk of it. And yeah, they got plenty funked up! Bootsy then hooked up with Snoop Dogg, the Chilli Pepper's, Phil Ramone, Eddie Krammer, Buddy Miles, Sammy Hagar, Keith Richards, Bobby Womack, you name um and Bootsy was in the mix. Then all of a sudden Bootsy along with Parliament/Funkadelic was inducted into the Rock and Roll Hall of Fame in 1997. In 2002 Bootsy recieved his first Grammy with his friend "FatBoySlim" (Weapon of Choice) now Bootsy is working on an upcoming album release entitled: ("The Funk Capital of the World) THE GROOVEMENT HAS BEGONE, and it' on tha' ONE Baba!!

Bootsy Collins Foundation, our Motto is:
"Say it Loud-An-Instrument-4-Every-Child" this foundation is designed for the preservation and education of past, present and future programs to keep the youth motivated and educated on music and how music is the secret code to modern longevity. If you are a Bass Player and you want to pump up your skills go check out my Bass school called: Funk University, visit us on line at: www.the funkuniversity.com
To learn more about what the funks goin' on, visit the Website at: www.bootsycollins.com Official Bootsy Collins Website .

"America is at the crossroads of an exciting new future and many new challenges, but we must remind ourselves that the foundation of America is built on the freedom we enjoy every day. Those freedoms have been given to us by the brave men and women who have courageously served our nation and most especially by those who have given the ultimate sacrifice. This spirit brought together an incredible array of diverse talents and voices to salute our men and women in military uniform on 'Fallen Soldiers Memorial.'"

You Can also check them out at www.bootsycollins.com
"Kan-Dee Singer/Songwriter"

Tara" My other Ben-Gal pick of the Year

Gretchen Wilson is my FuNkY cOuNtRy