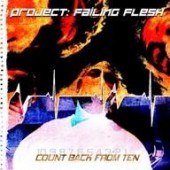 -The result of lab research by co-founders Kevin 131 and Tim Gutierrez, Project: Failing Flesh mutated into existence when vocal specialist and current E-Force leader Eric Forrest was added as the final component of this sonic experiment. Forrest, himself no stranger to the extreme sciences (having previously garnered success and acclaim in both E-Force and Voivod), proved to be the missing variable needed for Project: Failing Flesh to provide the planet with the first documentation of their studies. In the year 2003 A.D., the three scientists emerged from Assembly Line Laboratories with the presentation entitled "A Beautiful Sickness." Self produced by the P:FF collective and engineered/recorded by Kevin 131, this aggressive, brutal, and precise collection features nine original exhibits along with an alteration of the legendary Venom classic "Warhead". With these findings properly recorded the band offered their discoveries to the music world.

In September of 2003, P:FF signed with Karmageddon Media. Exactly one year later, Karmageddon would finally filter the "A Beautiful Sickness" sessions through the unsuspecting extreme music network. Several months later, after themselves reviewing both the sonic and visual results of the debut report, Candlelight USA assumed the function of distribution in North America. Most existing feedback on this edition of P:FF research proved overwhelmingly positive. Soon after, a second battery of sound tests took place in the depths of Assembly Line Laboratories. With the next accumulation of frequencies captured on magnetic medium it was again time to find a route in which to supply the recordings to the uninitiated. In fall of 2006, Greece based Burning Star Records signed on to be disseminators of the new findings which function under the title “The Conjoined.” The company made them public in April 2007. Shortly before, a P:FF interpretation of the Celtic Frost song “The Usurper” was submitted for internet-only inspection.

As the outcome of "The Conjoined" sessions were being evaluated by the metal community, the members of Project: Failing Flesh finished a third set of frequency experiments. Completed in the year 2010, this new ensemble of recorded songs has been filed under the title "Count Back From Ten."

My Spirit Willing, My Flesh Failing