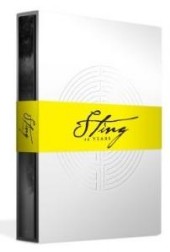 Since 1985, Sting has released 12 solo albums. His latest endeavor, Symphonicities, is the companion CD to his critically acclaimed ‘Symphonicity’ world tour, featuring the Royal Philharmonic Concert Orchestra, conducted by Steven Mercurio. To also accompany the tour, a CD/DVD package, Live in Berlin, will soon be released on Deutsche Grammophon/Cherrytree Records.

For nearly four decades, Sting has remained at the forefront of the public consciousness and has been widely recognized for his musical contributions, collecting an additional 11 Grammys, two Brits, a Golden Globe, an Emmy, three Oscar nominations, Billboard Magazine’s Century Award, and MusiCares 2004 Person of the Year. He has appeared in more than 10 films and in 1989, starred in The Threepenny Opera on Broadway. In 2003, Sting published a memoir entitled Broken Music and later released Lyrics, a comprehensive collection of lyrics with personal commentary spanning his career. Sting’s support for human rights organizations such as Amnesty International and the Rainforest Foundation, which he co-founded with his wife, Trudie Styler, in 1989, also mirrors his art in universal outreach.

Sting - I Can't Stop Thinking About You

Sting - Shape Of My Heart (lyrics)