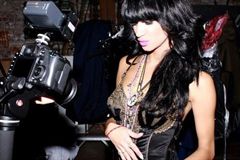 Location:
BOROUGH GYPSY, US
Type:
Artist / Band / Musician
Genre:
Pop / Hip Hop / R&B
Site(s):
Site
BioConnections
CocoRosie
Antony and the Johnsons
Hercules And Love Affair
Ben Tyree
ToddCohen
Goersch
Sounds of Nicholas
Jeff Langston
Nomi Ruiz is a singer/songwriter from New York City who currently leads the dance/pop/r&b group Jessica 6.
Nomi released her debut album 'Lost In Lust' on her own independent label Park Side Records. The album is a song-oriented downbeat electronic album steeped in the grittier ends of early-�90s hip-hop and R&B production. Since its debut, she has toured with artists such as Debbie Harry and CocoRosie. She also toured with Antony & The Johnsons as part of their �Turning� project.
She then received worldwide recognition for her vocal contribution on Hercules and Love Affair�s self titled debut album and live show. Nomi was featured on the Hercules and Love Affair songs �You Belong�, �Hercules Theme�, and �I�m Telling You�. Pitchfork Media placed �Hercules Theme� at #21 on The 100 Best Tracks of 2008. She toured extensively with the band in support of the album, singing her song contributions as well as those of Antony Hegarty. The Guardian described Ruiz as �boasting the spookily effortless air of a future pop icon.�
In 2009 after the extensive world tour with Hercules & Love Affair she formed the group Jessica 6 and released the debut single �Fun Girl� on May 21, 2009, by the label Midnight Sun Sound. In June of 2011 Jessica 6 released their debut album 'See The Light' on Peace Frog Records and toured many territories around the world such as the US with Holy Ghost, performed for Nicola Formichetti's New York Pop Up Store opening sponsored by Thierry Mugler parfum, for Tommy Hilfiger Denim Live with The Rapture in Madrid, Haluk Akakce's Biennial Art Opening in Istanbul, Turkey, in Berlin, Germany at Michael Michalsky's StyleNite Fashion show, in Greece on the Mad TV VMA's as an international guest and they continue to perform and expand worldwide.
Nomi collaborated with The Ones on their single �Let�s Celebrate� from their upcoming fourth album Blast From the Past. �Let�s Celebrate� peaked at #9 on the U.S Billboard Hot Dance Club Songs. She also contributed as a vocalist and songwriter on the song 'Sway' which was released on Beni's album 'House Of Beni' and on Eli Escobar's EP 'Desire'.
Nomi was featured in V Magazine photographed by Inez & Vinoodh & styled by Nicola Formichetti and also appeared in the campaign film for the Mugler Spring/Summer 2012 menswear collection titled �Brothers of Aracadia� along with Jessica 6's song �White Horse�.
Nomi is currently living in Greece where she is touring Europe with her DJ/Live PA show and is also in the studio working on a follow up to Jessica 6's debut album 'See The Light'.

Nomi Enckell - Let Me In

Nomi Enckell - I Will Be