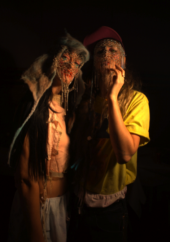 (not available online / in stores)

Check out the "Rainbowarriors" video here.

After touring for the better part of 2007 on our last album, we were ready to create new songs. We had just finished a tour in South America, and we spontaneously set out to find the nearest analog studio and someone to twist the knobs. Through a mutual friend, we met Nicolas Kalwill, a Buenos Aires based studio engineer who has worked on 15 Argentinean gold and platinum albums. He suggested a world renowned, vintage studio in Buenos Aires called Panda, where we spent half of the dozen sessions that it took to make this record.

Nico Kalwill is the engineer all artists dream of - very talented and always willing to patiently work with the total creative chaos in which our songwriting thrives. We found such an intense chemistry together that we made a tradition of it. After each major tour, we would all meet up and record in whichever studio we found closest to our last show. That is how the story went until alas, we whittled it all down, like gnomes carving soap castles in prison, to our favorite musical adventures from this period.

Although we sensed potential during our recordings for "The Adventures of Ghost Horse and Stillborn", it wasn't until the sessions at Panda that our spritely new band member, Gael Rakotondrabe, became our kindred, musical spirit and creative partner in so many of the songs on this album. A pianist from Reunion Island who grew up playing Creole music, Gael went to Paris to make his career in jazz. His eclectic background has lent itself to such projects as: writing and arranging classical works for the Royal Dutch Orchestra, winning the first prize at the Montreux solo piano competition, as well as collaborating with CocoRosie onstage and in the studio. Gael’s willingness to try anything in the realm of sound has allowed for an explosive alchemy in collaborative song writing.

The first session at Panda was amazing. We were bursting with music, too many ideas to document at one time. We stayed up for five nights straight and recorded almost seven songs. Everything at that point was based on improvisation and experimenting with old analog gear. The first song we recorded was "God Has A Voice, She Speaks Through Me", a dance song about suicide, spiritual ecstasy and life under the veil. This tune was the beginning of a long and varied path eventually leading to the completion of our new album with little trace of the ocean disco from which we embarked.

At our second session in Buenos Aires, we met Bolsa - a legendary rock drummer and drum doctor from Argentina with awesome hair. Bolsa happened to be next door tearing it up when we were working on the song "Hopscotch". We had laid down the vocals and asked Bolsa to pump it up with some jungle style beats: "jungle" as in "drum and bass" from the early 90's. "Hopscotch” became our most playful and schizophrenic song on the record.

Between our two vocal stylings we have pushed even further, our differences and played with this dualism to show an inner and outer world expression in the characters of our songs.

Outside of Buenos Aires, we also spent time recording in Paris, Berlin, New York, and Melbourne, but it was during a rare home recording that we wrote one of our favorite songs. We were searching through some old boxes from our mother's past and found a tape from the 70's that she had recorded herself. The words were in Cherokee with an old, creaky folk sound. We used her song with a stale native drum in our recording of "Pink Balloon of Time", which later transformed into "Undertaker". With our mother's voice in the beginning and the end, “Undertaker” delves into a dreamy soundscape of bass clarinets and drones reminiscent of the film, "The Dark Crystal", and you will find lyrics of a medieval vernacular.

After a year and a half of fairy toil, a couple of these new songs started to push their way into our live shows. We knew then that they were ripe and ready to be heard. We reconvened with Nico one last time to mix them into our fourth album, Grey Oceans.

Journeying inward, into the forest-dark ember, led by crystal light, the voicing of whales and ancient souls passed, we embarked; slipping with muddy foothold, on a destination-less ride through darkened waters filled with starry-eyed daughters. We have had many guides, some dead ones, some alive, some sisters with names pronounceable, others, just an inkling, the last heat of summer, seeping up, out of the evening sunned soil in september. We close our eyes, to hear the decoration, a burnt out corn field, a sad place to remember, the story of a heartless crow, his countless cackles haunting, his mission, misogyny. We dual waves, heavy laden with salt, of foisted female identity, underlying, trinity is crying, she mourns so sweetly. Heavy on our hearts, the weight of time; the earth who lost her balance and fell into the snowy depths of industrial mucus. Sweet christian lord, let me share my deepest, be it dewy or enigmatic. Let them be romantic, all my gestures unto you. We've been swept away by our long hair, swept away by our longing to give. A glass eye, a glowing tooth, just a knick knack or two, some small evidence of the sunken, drowned and now immortal.

The frown may frown upon these inappropriate undergarments, showing too much and bleeding right through. To unshame and to unshackle, each song an aim, a hand-crafted-arrow shot towards an essence. A unique perfume, the soft breath, a flower from a meadow, or a moldy cloth, mundane. Miracles can happen when wild morning glories do a melodious exchange. If perhaps we may capture, just a bit of the flowers laughter and retell it all to you, then the sky might turn from grey torrent tangles into a tranquil silk trouser of a seafarer, blue.