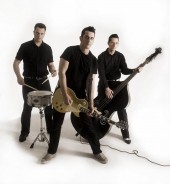 Location:
Zurich, Sw
Type:
Artist / Band / Musician
Genre:
Psychobilly / Punk / Rockabilly
Site(s):
Site
Label:
People Like You (www.peoplelikeyou.de)
Type:
Indie
BioConnections
MAD SIN
DONOTS
Mad Marge and the Stonecutters
Peter Pan Speedrock
Angel City Outcasts
Asian Man Records
People Like You
The SEWER RATS
the monsters
Admiral James T.
Stomp Records
HORMONAS
The Long Tall Texans
BUZZKILL
Loaded
Household Name Records
Leech Redda
GUZ
They are around forever. 15 years or so. They're cool. They look good. And they love what they do (almost always. Just like the audience). They rock and roll, struggle and suffer, lough and cry. They're on the run and on the road. Round the globe a couple of times. Austria, Belgium, Denmark, Finland, Sweden, Norway, Holland, Spain, Germany, France, Italy, Slowenia, UK, Hungary and the Czech Republic, Canada, USA and Japan have been toured. 400 shows in the last three years. Thousands of albums sold and everybody's ass kicked. Bad Religion, No Means No, Voodoo Glow Skulls, Snuff, Dwarves, Mighty Mighty Bosstones, Slackers, NoFX, Rancid. But they're still hungry. Even though their backs hurt cause floors suck to sleep on. Too much cofffee and cigarettes. Always broke. But the next album is gonna be great. Punk, Rockabilly, great songs, cool beats, pop but good. They're moving on and up. Now even with a homepage. And probably one day with nice shirts. And with a new old van. Pedal to the metal!

Buy >"AFTER ALL" and previous albums here!
Order >"EVERYTHING YOU WANT AT THE NEW PEACOCKS SHOP!

Cover of the North-American version on Stomp Records.
New cover of the european re-issue! Now you can get the "Touch and Go" album plus the "Gimme more" EP on one CD!!!

The Peacocks - After All (Full Album)

The Peacocks - Need A Break