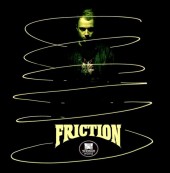 OUT NOW ON SHOGUN AUDIO

Brighton raised, multi award winning DJ Friction is a member of an exclusive club. He is one of a handful of DJ's to have smashed through the ranks and become a superstar in his genre simply through an unbelievable talent behind the decks. This year has seen him add more accolades to his ever increasing CV and is regarded by many as not only the most skilled but the most diverse DJ in drum & bass.

As a teenager Friction played at events and promoted his own club nights much like any other young DJ trying to make a name for himself. He soon linked up with Brighton producers 'Stakka & K-Tee', who were heavily involved with Andy C's Ram Records imprint. Many hours were spent in the studio and in February ’99 Friction released his debut single ‘Critical Mass’ under the name Kinnetix on the 'Under Fire'. Before long Friction received interest from big Drum & Bass record companies such as TOV & Renegade Hardware. He soon produced a track for TOV's ‘Here Comes Trouble’ EP with the defining track ‘Photon’. Things were most definitely moving for this talented, hugely motivated young man from Brighton. Immediately following that was the acclaimed ‘Altitude’ with Stakka & Skynet, regarded throughout the scene as a truly ground breaking piece of drum & bass, fusing high energy techno and jungle, helping to start what was regarded by many as the 'Neurofunk' sound.

Releases followed on a host of top drum & bass labels including Valve, Tru Playaz, Passenger, Hardware, 31 Records, Hospital and Charge to name a few. These days due to his non stop Club and Festival schedule the releases flow slightly slower but always to high critical acclaim. After joining BBC 1Xtra in 2002 at the station’s launch, he made his mark quickly. His 'Mix Show' was truly groundbreaking, creating a massive following worldwide, reluctantly calling it a day after two years with an constantly growing schedule proving too much. Numerous awards have followed, including ‘Best Newcomer’ in the 'Drum & Bass Arena' Awards in 2002, ‘Best Breakthrough DJ’ at the 2003 'Knowledge Magazine Awards', another 'Best Newcomer' at the 2004 'Accelerated Culture Awards', Runner Up at The Raveology DnB awards 2007 and finally 'Best DJ' at the MTV Romania Awards in 2007.

Friction has continued to make his mark as one of the biggest DJs in the scene, playing festivals and clubs all over the world. His label Shogun Audio is also a powerhouse in the drum & bass scene, bringing the deeper minimal vibes to the dancefloor with a diverse roster including Friction, K-Tee, Alix Perez, Spectrasoul, Icicle, Rockwell, and SP:MC. 2010 has been a big year for the DJ/label boss releasing his massive "Mixed" CD on Ministry of Sound, as well as teaming up with Camo & Krooked for one of the years biggest singles, "Stand Up" (feat. Dynamite MC). Keep it locked, the best has yet to come!

Friction - Dare (Hold It Down)