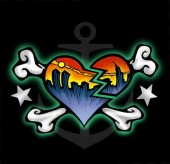 You can count the number of bands who've stayed together for 20 years on two hands, and you can use just one to count those who've consistently released quality material for two decades. This year, The Bouncing Souls enter that esteemed category, and in keeping with their D.I.Y. roots, they've done it without major labels, corporate radio, MTV, or teen magazine pinups.

When married couples celebrate twenty years together, they're usually showered with anniversary gifts. The Bouncing Souls are celebrating their milestone by reversing that tradition and giving back to the fans, releasing one original song per month throughout 2009. More on that later, but first let's look back on some earlier days…

Picture it: 1989, a Knights of Columbus Hall in Bernardsville, New Jersey. A supportive music-loving teacher throws down $120 to cover expenses. A bunch of sweaty high school kids gather to sneak beers and rock all night at the debut show of a band called The Bouncing Souls. And a Jersey institution is born.

But the Souls' story actually begins a few years earlier than that historic gig. "Pete [Steinkopf] and Bryan [Kienlen] had a cover band called The Switch around '86 and '87," recalls frontman Greg Attonito. The band was largely booked at parties teeming with college chicks and kegstands, and occasionally, their friend Attonito would join in to channel his inner Roger Daltrey or Billy Idol.

"Then we started another band called Brad Karma and the Absent Minded Fruit Bats," says guitarist Steinkopf. "There was one song that we had called 'Quest For Goodie' and Greg would jump around and sing all kinds of crazy shit to it off the top of his head. We were all teenagers growing up in the suburbs, just looking to create our own fun."

Like any young band with energy to burn and original songs under their belt, the boys took to the road in order to share their music and spirit with any crowd that would listen. While there were aspirations to find audiences across the globe, even college parties and basements were enough to keep hope alive in the early days. As bassist Kienlen puts it, "We never spent too much time worrying about the future. The point of the band was always celebrating the here and now, trying to make the best of whatever was in front of us at the time."

Though it wasn't until 1995 that the band was able to tour on a full-time basis, they soon found the road to be a more frequent home than the comfort of their own beds. From headlining tiny rooms in remote towns to playing Wembley Arena with Green Day and Tokyo's Budokan with My Chemical Romance to spending time on seven different editions of Vans Warped Tour (totalling 11 months, with more sure to come), The Bouncing Souls have clocked more travel time than most airline pilots.

Since 1996, the band has had a constant traveling companion and honorary fifth member - their primary touring vehicle, lovingly called The White Castle. For ten years, she gave dutiful service, until The Gold Tour, when her engine gave out - with 300,000 miles on the odometer. Regarding her decade of service before temporary retirement (the proceeds from that tour are rebuilding the old gal's guts), Attonito says, "We converted those miles into road hours. Estimating about 40 MPH - because a lot of them aren't highway miles, with plenty of time sitting in traffic - it was staggering. Our estimate rounded out to 333.33 days driving in our truck! No exaggeration: that's about a full year!"

Fortunately, there are many more tour dates in store for both the band and their beloved Castle. Exactly how many of those dates is impossible to say, though, since the band hasn't exactly been keeping score. "I'd love to figure out how many shows we've played.I wish we kept count," says Steinkopf. "I know bands that have and it's awesome. It must be way up in the thousands by now, though."

Frequent attendees of those gigs (true believers, all) hail the Souls as one of the best bands in the world, and the boys feel the same devotion to their fans. "Bouncing Souls fans are the greatest friends ever," enthuses Attonito, "They're passionate and full of life. They really are part of the band in the sense that we're plowing a path through life together in good times and in bad."

"It's pretty much across the board too," adds Steinkopf. "every age group.all different kinds of people. My favorite is when we meet people that were there from the start and now they have kids of their own that they bring to our shows. We really are a part of each others' lives."

"And any time someone says you've influenced them certainly makes an impact on you. To know that someone has looked at something you've done and they have taken something from it - whether it be in a lyric or the way you play your instrument - has got to be the highest compliment paid," says drummer Michael McDermott. As a final piece of evidence, Kienlen points to the MySpace gallery of band-based tattoos adorning their admirers: "Last I checked it's up to almost 300 and counting. Our fans are hardcore in their unwavering support. We really are one big family."

And families share things, which is why this year, the Souls have decided to gift their family of friends and fans with twelve spanking new songs, available for the standard less-than-a-buck download on the first of each month in '09, or for purchase on 7" vinyl in quarterly compilations on their own Chunksaah Records (each featuring one additional bonus track).

Steinkopf elaborates: "We all decided that we wanted to do something different. We'd been on the same schedule for years: write a record, record a record, wait for the record to come out, then tour on it until we wanted to start the cycle again. We also wanted to break our own patterns and do something that was going to be inspiring and new for us."

Attonito adds "I remember being in New Zealand and saying we should do a release that doesn't come out all at once…I was thinking in the context of a TV series. Somebody else might have come up with the first of the month idea but usually all the creative stuff we do is a process. Everybody kind of throws a stick on the fire at the right time in the collaboration."

Doing it for the sake of the music, the fans, and their own inspiration for twenty years, the group – and their White Castle – are going pedal to the metal on a full tank of gas. According to their frontman, "The shared driving force is part of the mechanics that keeps the beast truckin' down the next highway. We were - and still are - a few passionate, rebellious, creative, idealistic, party loving punks looking for a good time, for something to believe in, and for something meaningful to live for."

With twenty years behind these legends from the Garden State, there's a lot more still to come from The B.S. – and that's no bull.

Hey.we also have a record label called CHUNKSAAH RECORDS! Check out our myspace page and add us there too!

Help us get the word out!Copy this code to your website/myspace to display this banner!

The Bouncing Souls - Up To Us (Official Music Video)

The Bouncing Souls - Ghosts on the Boardwalk 2010 (Full Album)