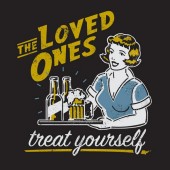 "Louisiana" - by The Loved Ones with Tad and Franz of The Hold Steady from Tony Bowman on Vimeo.

For as much as punk rock is about breaking down the barriers we build around ourselves, it’s a challenge to be a “people’s punk band” when the scene that spawned you wants you to stay inside its walls forever. But with their new, second album, Build & Burn, that’s just the challenge Philadelphia’s THE LOVED ONES are ready to take on. Broader-focused, more rock & roll-inspired, and (dare we say it) catchier than ever before, the disc finds the quartet crafting a sound that’s as worthy of dive bars stages as it is of warming stadiums for Bruce Springsteen or Tom Petty. Forget the “pop-punk” tag that’s followed these guys just because they’re old hardcore kids (alumni of the Explosion, Trial by Fire, the Curse and Paint it Black, if you’re keeping score) with a gift for melody. If you have to pigeonhole it, Build & Burn is POPULIST punk—and it’s also the best damned thing the Loved Ones have done.

Lyrically speaking, Build & Burn—which follows the band’s acclaimed 2006 debut album for Fat, Keep Your Heart, and a self-titled 2005 EP on Jade Tree—is also the Loved Ones’ widest-ranging record yet. It may not be a double-length concept disc in the vein of, say, American Idiot, but read between the lines and you’ll find the songs all revolve around a basic human concept. “I tried to write around the theme of examining how the choices we make affect our lives,” singer/guitarist Dave Hause explains. “Whether you’re a ‘he’ or a ‘she’ or old or young, ultimately, the thing that sets you apart from other species is your ability to make choices. Those choices can lead to your undoing as much as they can make your life come together in the way you want it to, and that’s something I’ve been going through daily for a while: You can build things up, but there’s always that urge to go the other way and burn them down.”

Oddly enough, the Loved Ones might not have survived to make Build & Burn without a few torched unions to bind them. With inner-band relationships already strained after a 2006 European tour supporting Keep Your Heart, Hause and drummer Mike Sneeringer had the wind knocked out of them when co-founder and bassist Michael Cotterman announced that he was leaving. But shortly after touring guitarist Dave Walsh and fill-in bassist Chris Gonzalez pulled the plug on their own well-regarded band the Explosion in April of 2007, the Loved Ones’ future state became clear. “It just grew organically from there,” Hause says. “With Dave and Chris in the band full-time now, it’s just like a gang. Dave and I have been friends forever, and the new lineup’s even brought Mike and me closer.” And Gonzalez, who actually played guitar in the Explosion before transitioning to his current instrument, “is just like a secret weapon,” Hause says. “He’s a great instrumentalist, but he sings, too – all those harmonies you hear on this record are something we were never able to have before.”

If the Loved Ones’ new lineup is a tight-knit crew, the Build & Burn sessions reflect just how far outside of the quartet that feeling extends. Produced by longtime friends and tourmates Pete Steinkopf and Bryan Kienlen of the Bouncing Souls; recorded at the Wild Arctic in Queens and Kate’s Place (a.k.a. the Souls’ manager’s basement) in Asbury Park, New Jersey; and engineered by Bob Strakele (the Hold Steady), Build & Burn carries the spirit of nearly everyone who touched it. Steinkopf and Kienlen’s gang vocals adorn tracks like the anthemic album centerpiece “The Bridge,” and the pair’s dare to have the Loved Ones cut their first-ever love song (a feat the band pulled off in a record 90 minutes’ studio time) resulted in the heartwarming, country-rock-tinged “I Swear.” Another good friend of the band, the Hold Steady’s Franz Nicolay, contributes keys throughout (check out his work on the balladic “Selfish Masquerade”), and his bandmate Tad Kubler lays down a solo on the rollicking, Johnny Cash-meets-Ramones “Louisiana.” Even Hause’s and Walsh’s wives appear on the album, contributing vocals to “Third Shift” and “Brittle Heart,” respectively.

Lest fans of the Loved Ones’ hardcore salad days run from terms like “country rock” and “balladic,” the album-opening one-two punch of “Pretty Good Year” and “The Inquirer” should prove that while the band have grown up, they haven’t grown out of their own skin. And for any punk purist who thinks there’s no way a band can count Bruce Springsteen and Hot Water Music as equal inspirations, well, odds are you’ve never sat down to compare the two. “Punk is a big part of how we all came to play music, and that spirit is still all over this album,” Hause says, “but punk isn’t the only style of music we’re interested in playing. I’d rather write in a way that’s completely honest, regardless of genre labels, and reach people through that honesty, rather than play a role and try to sell records intentionally.” He laughs. “Records don’t sell anymore, anyway—better to just prepare for the road and hope people meet you there.”

Handguns "The Loved Ones Who Hate Us" Official Music Video

Jane - The Loved Ones Cover by Billy the Kid

Sanders Bohlke - The Loved Ones

The Loved Ones - Pretty Baby

Kaltes Grauen - The Loved Ones

the loved ones - ever lovin' man
▶ View All Videos