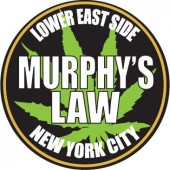 Location:
NEW YORK, New York, US
Type:
Artist / Band / Musician
Genre:
Punk
Site(s):
Site
Type:
Indie
BioConnections
Rancid
Bouncing Souls
Strung Out
H2O
Stay Gold Records
Since the mid-1980s, for many rebellious kids, experiencing a Murphy's Law show has been a rite of passage. The guys in Murphy's Law always put on more than a live show & their performances are big parties where everyone's invited. A mainstay of the NYC scene for years, extensive touring has secured Murphy's Law as a perennial favorite of hardcore fans everywhere.

Over the course of their career, Murphy's Law have recorded five classic full-length albums of angst-ridden punk songs: "Murphy's Law" (1986), "Back With A Bong" (1989), "Best of Times" (1991), "Dedicated" (1996), which was produced by Daniel Rey and "The Party's Over" (2002). Countless singles and covers have been recorded throughout the bands career which are listed on their website

Murphy's Law have been touring Japan, Europe and the U.S for years despite record label support, thus proving themselves to be one of the hardest working bands out there as well as the hardest rocking.

ALL BOOKING INQUIRIES SEND TO: