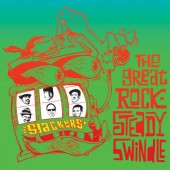 Location:
New York, New York, US
Type:
Artist / Band / Musician
Genre:
Ska / Reggae / Soul
Site(s):
Site
Label:
Hellcat
Type:
Indie
BioConnections
The Aggrolites
Easy Star Records
King Django
Dub Is A Weapon
Victor Rice
David Hillyard & the Rocksteady
CRAZY BALDHEAD
The Uplifter
"The Slackers are part of an imaginary universe. It wasn't their fault, well not completely. The caterpillar told them not to eat the mushroom on the right. But they did and for 15 yrs now they've had to play Imaginary-Jamaican-Rock-and-Roll, and try to explain that to everyone who passes. One asks,"Are you a reggae band?.where are your dreadlocks then?" Another says,"YOU DONT SOUND LIKE PUNK-ROCK WITH HORNS AT ALL!!" One elderly gent says,"Why it sounds like a lot of music I used to like, but I don't think any of you boys look addicted to HEROIN!" Doomed to try and explain themselves to a world full of hungry club-promoters, style-police, genre-slaves and the generally confused, they wrote bio upon bio, hoping to snag someone.ANYONE!.who might understand.here is attempt 6,364."
- Vic Ruggiero, The Slackers

The Slackers are a classic American band that is equal parts grit and grace. Their slow rise against the odds is a story in perseverance and a belief in their musical vision, what Vic likes to call, "Jamaican Rock N Roll." While they have been influenced, and even personally taught by Jamaican ska/reggae originators, like the Skatalites and the Upsetters (Original backing band for the Wailers), the band sees its music as an extension of the traditions of the United States. This band is equally appreciative of old blues, country, 60s soul, rock, and Rnb as it is of reggae, rocksteady, dub, and Ska. It is as if the Rolling Stones or the Yardbirds had grown up on Bob Marley as well as Muddy Waters.

Smashing the stereotypes of "ska" as happy,uptempo, and shallow music, the Slackers play with an aggressive edge and their songs veer in themes from the personal to the political. They can out jam any hippie band and outwrite most singer songwriters. From their 1996 release, Better Late Than Never through to 2010 with The Great Rocksteady Swindle, they have established themselves as America's premiere interpreters and innovators of Jamaican music and a pretty good rock band to boot.

The Great Rocksteady Swindle (release date 4/20/10) is a songwriting tour de force with all band members contributing to its gutsy muscular sound. "Mr. Tragedy" references the Specials while "Boll Weevil" references Sam Sham & the Pharaohs. "Cheated" seethes with bitterness while "Thank You" offers the possibility of hope. As the band has matured you can’t even tell anymore where the rock begins and the reggae ends, its become The Slackers.

The band basically divides its recorded output into 2 categories. First of are their "albums", which are as Dave says with just a hint of his typical sarcasm, "these are our ‘works’ where we try to take over the universe." This steady stream includes Better Late Than Never (1996), Red Light (1997), The Question (1998), Wasted Days (2001), Close My Eyes (2003), Peculiar (2006), and Self Medication (2008). Back in 1996, the NY Times declared the Slackers to be part of "the sound of New York", a mantle they haven’t given up since. Alternative Nation stated that their music is "protest music made for dim, sweaty basements, The Slackers would sound at home supporting Rancid as well as some grizzled New Orleans electric blues trio." The LA Weekly wrote about, "their unfettered energy, unerring skankability, and playful anger."

Not content with letting the record industry dictate their output schedule, the band has also put out numerous eclectic and whimsical albums following their different interests of the moment. Slackers & Friends (2002) saw the band performing with some of their idols like The Congos, Glen Adams of the Upsetters, Cornell Campbell, and Doreen Schaeffer. International War Criminal EP (2004) was a bitter broadside against the Bush Administration. Afternoon in Dub (2005) is pure reggae bliss. Boss Harmony Sessions (2007) was a collaboration with DJ Boss Harmony who arranged and refiltered tracks in unorthodox ways. Lost & Found (2009) is a compilation of forgotten tracks, alternate versions, and remakes from the bands recording vaults.

The band has also put out 3 live albums; Live At Ernestos (2000), Upsetting Ernestos (2005), Slack In Japan (2005), and 2 DVDs; The Slackers: A Documentary (2007) and Live at the Flamingo Cantina (2009).
More recently, the band has started releasing their live concerts through www.whatevski.org and has plans for releasing more compilations digitally.

This focus on the live show is not surprising because the Slackers have a good part of their existence on the road. Since 1997, the band has been doing around 110 shows a year. This includes some 20 major North American tours, 14 European tours, 3 Japanese tours and 2 Brazilian tours. They have played in 42 different US states, 6 canadian provinces, 22 european countries, 4 Latin American nations, Turkey, Japan, and South Korea.

Hopefully, if you have read this far, you are starting to get the point that the Slackers are a phenomenon. A worldwide phenomenon. An underground band with a cult following, they can fill venues everywhere!

The band has come a long way from their little dirty rehearsal studio on e.3rd street on the lower east side.

The slackers - An Afternoon In DUB - full album

The Slackers - My Bed Is A Boat (Official Music Video)