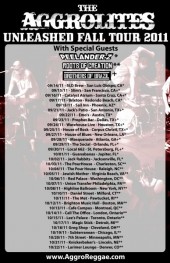 Location:
LOS ANGELES, Canada
Type:
Artist / Band / Musician
Genre:
Reggae / Soul
Site(s):
Site
Label:
HELLCAT RECORDS
BioConnections
BREAKESTRA
HEPCAT
THE MISGUIDED
Complete Control
OH LORD PRODUCTIONS
Korey Kingston
Blood Orange Recordings
The Aggrolites are more than a band they are a movement unto themselves. They carry a banner - one created with their own hands. This banner reads, "Dirty Reggae," and represents their signature fusion of reggae, soul, grit and determination. For seven magnificent years, this dirty reggae bunch has rolled from city to city, across the pond and up main street USA. They rally the kids, the parents, the students, the cops, the bosses and the drifters. The people come, they relish in The Aggrolites, the dirty reggae and the joy that comes with it all. The liberating rhythms and catchy grooves demand a return trip.
Out of the Los Angeles school of hard knocks, The Aggrolites have earned a Ph.D in "feel good music." On the road they educate with the thunder and punch of the reggae drums and bass, the ripping, soulful melodies of the organ and guitars, and Jesse Wagner's voice - a gift from the heavens, a perfectly intact gift from Otis, Sam, Ray and Wilson.
Early 2011 will see the release of their 5th full-length "Rugged Road" from Young Cub Records. The sessions will be released as a series of vinyl and digital singles, as well as a compilation. The recordings took place at Young Cub Records' studio headquarters in Boston, MA. Of the sessions, Roffredo says the band wanted to "lay down these new rhythms on reel to reel tape, playing all together in one room."
The Aggrolites have a specific way of making music. They don't over think it, they don't obsess over pop culture demands, they walk onto a stage or into a recording studio and let "it" happen - a culmination of inspiration - from the road, from playing alongside legends, and from the energy and motivation of their die hard fans.
They have four other full-length albums to their credit -- Dirty Reggae (Axe, 2003), The Aggrolites (Hellcat, 2006) and Reggae Hit L.A. (Hellcat, 2007) and IV (Hellcat, 2009). "A glorious, surprising treat. Ideal for your next soul shakedown party," raved Peter Relic from Rolling Stone. In 2007, the band also collaborated with Rancid front-man Tim Armstrong on his solo A Poet's Life (Hellcat 2007) CD/DVD release.
The Aggrolites have shared the stage with Social Distortion, Rancid, Flogging Molly, 311, Michael Franti & Spearhead, Dropkick Murphys, Against Me! and Gogol Bordello. They have graced the stages at such notable events as Vans Warped Tour, SXSW, Coachella, Fuji Rock in Japan, West Coast Riot, Open Air St. Gallen, Pohoda Festival, Rebellion Festival, Chiemsee Reggae Festival, Couvre Feu Festival, among numerous others around the world.

The Aggrolites - Banana (This is ska festival 2013)

THE AGGROLITES - Keep Moving On - stripped down MoBoogie Loft Session

THE AGGROLITES - Work To Do - stripped down MoBoogie Loft Session