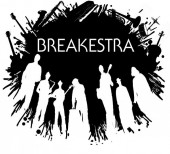 The recording started in 2007,a little while after the main touring for hit the floor had come to a slow & also after the hard painful process of merinating on the loss of my dj mentor/partner & beloved friend DJ DUSK's passing in 2006.Slowly i started to get back in the mix & soon found some inspiration from trying to work it out from behind my guitar & drum kit.Having chosen sometimes out of necessity & impatience to be the producer, engineer,mixer & (most of the time) overdub intsrumentalist takes it's tolls on recording productivity.hopefully not my only technique for future projects.

The first track i started was inspired from a gig we did out in claremont Cal at the Kahoutek fest where in the middle of the show i witnessed Mix Master Wolf doing a natural fun little dance of his own that girls in the front row started imitating that i could not help but name "the Lowdown Stank", a phrase i'd heard wolf utter many times.I brought in very funky dirty waffle (sandy eggo) based new recruit, Jake Nakor on the drums for this one and that was the start of a long sometimes staggered but fun process of building my songs one overdub at a time.

The second track to get in the mix was "set the sun" an obvious ode to Dusk that in actuality is a bit more on the funk soul rock side of things & was not intended for Breakestra.It opened the door for me to allow some other psychedelic funk rock sounds to enter the mix like "Show me the way" which i created for mixmaster wolf intentionally to let his soul rip through in his most honest fashion.that song is way influenced by everything from early funkadelic(wolf's all time favorite) & other fuzz funk records like Bobby Franklin's insanity which i had been discovering while digging for records to drop at my funky sole party here in L.A.The fact that i had deprived myself or rockin' the guitar live since picking up the bass 10 years ago for Breakestra definetelly fueled the fuzz up the mix!

Also Djing with Cut chemist & Egon at The Sole exposed me to many deep world psyche funk sounds on a weekly basis as well my friend Jesse C's constant sharing of heavy african funk & more.9 years of hearing Dusk playing funky cumbias & Afro cuban salsa on thursdays at Rootdown opened me to sounds that are subtley apparent on some of the new record.

Another inevitibility was finally Bringing the soulful sanger Afrodyete into the studio where we worked out our first collaboration "come on over".It's also the first time i used an acoustic piano on a breakestra record and flexed some of my limited piano skills i picked up as a kid taking lessons.Don't think Mrs. Lindham would be too excited.

As well i got to play out my love for charles stepney/richard evans Cadet records sound on
the instrumental "you'll never know" which features the fine funky acoustic piano of my friend the Jer bear-Jeremy Ruzumna, daphne chen on violin & viola, myself on cello & funk drumming sicko, Pete "the funky buzzard" Mcneal!

Speaking of cello, what started as an instrumental i had written for horns to play a melody got transformed into a raw but sweet funky fusion cello thing called "me & Michelle" named after Wolf's reference to my cello & friend with benefits.Again impatience & curiosity won out with me trying the line out on cello & me saying fuck it, i'll let it ride.In spite of my little brother's objections & discomfort at the sound of strings playing a bunch of notes i have decided to let you all decide.

While the new record features Breakestra veteran James "the Funky penguin" King on saxophones("lowdown stank") & Flute (Dark clouds rain soul), I now introduce you all to David Moyer on saxes & chris Bautista on trumpet for many of the new songs & the men on the horns for the live shows these days.I was also very happy to have my homie sheffer of the Lions on trombone.

After most of the tracks had started to take shape i was looking at around 14 cuts(still too many for a record in my opinion) and i had an ear for hearing something kinda cumbia, funk & fuzz & with Emcees flowing in some sort of tribute to Dusk.I got a groove locked in my head, jumped behind the drum kit & knocked out a couple takes.Who to MC on it? While family is an obvious safe choice it also felt 100% right & fortunetelly i was able to reach tha Manphibian MC chali 2NA & with a little coaxing got Wolf to dust of his Lyric pad & show his skillz again as a funky man on the MIC.His style harks back to one of Hip hop's finest, Chill Rob G of the Flavor unit.

I had initially asked the cats to somehow tie some aspect of their lyrics, inspired from their experience.They no doubt brought the niceness but did not have any reference to Dusk other than it being dope mcing.After 2na suggesting i find some recording of dusk giving a shout out to throw in somehwere it popped into my head that i had a recording of Dusk rhyming on another beat of mine and that maybe i could find something that i could scratch into a verse.Blessedly i did find one of many dope verses of his that fit perfectly as it's "posed to be"!lol

Not sure what the first 12 inch or 45 single will be at this moment but that's seconds away.

Hopefully some more gabbin to come about how it went down.

Thanks to all the folks who helped with recording process & to all Breakestra friends out there on Planet earth.Dj DUSK REST IN PEACE & Keep funk Alive!

2006's "hit the floor"-ubiquity records-
Released on Stones Throw in 2001 The Live Mix part 2 put the Los Angeles-based live funk band Breakestra on the map. In 2005, their new album Hit the Floor (Ubiquity Records), a new single featuring members of Jurassic 5 and People Under The Stairs, and recent performances with GZA, Guru, Raekwon, Digable Planets and De La Soul (at New York’s Summer Stage) will launch the band further into the public eye.

While their debut album and legendary live shows predominantly paid homage to old school breaks n’ beats gone by, Hit the Floor goes a step further as Breakestra create an album featuring all-original compositions and songs. The funk flavor is as strong as ever and Breakestra’s main man Miles Tackett explains the transformation from a cover band into one flaunting their own material as the obvious next step, “While hip hop dj/medley inspired covers are the foundation of Breakestra, it is only natural we’d want to express our own soulful proclamations,” he says. “I've been releasing original funk cuts before putting out The Live Mix Part 2. The first Breakestra single was an original song called "Getcho Soul Togetha", so this album is really just a part of the natural flow,” he adds.

Four years is a long time to wait for a second album, but judging by the size and enthusiasm of crowds at Breakestra shows or at their weekly hosted Rootdown party in LA their fan base continues to grow. And the global funk scene, which Breakestra are thoroughly entrenched in, now includes a distinguished list of bands like The Bamboos in Australia, The Dapkings in NYC, the New Master Sounds, Speedometer and Quantic Soul Orchestra in England and seems to be growing stronger by the day. “I don't think this music is going to be here today but gone tomorrow,” Tackett enthuses, “it's the best it’s been in years.”
Explaining the time lag between debut and sophomore albums Tackett says, “I have a slight tendency to be a perfectionist, so creating all original material was a little more difficult than I thought.” He adds “It’s an intimidating thought for me that the music that inspired Breakestra had set such a high musical bar.”
To help kick-start recording Tackett opened a heavily soundproofed Funky Tilt recording studio last year. Setting it up from scratch with Tackett paying as close attention to musical detail as he does any of his recordings meant the public would have to wait a little longer to hear Hit the Floor, but eventually this space allowed for late night writing and recording sessions.
e242e91970ab058a9abf4fe56d0826fa