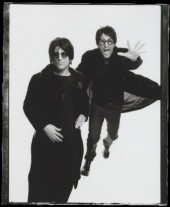 Influenced by The Beatles, classic blues, Bob Dylan, Philly soul and bubble gum pop the Contes wrote and recorded their first "album" in their living room at ages nine and ten. Big brother Stevie played drums a la Ringo and sang like Jagger-meets-Lennon on helium. Johnny would hang a plastic tape recorder microphone into the sound hole of a cheap acoustic guitar to achieve a killer electric "tone." Once Steve got his hands on John’s guitar he began writing songs and thought, “I can’t be singing my songs from behind a drum kit!” Brother John opted to pick up the bass and they were soon at the forefront of their central New Jersey Music scene. By the time the boys were in their early teens, they were earning partial keep backing their jazz vocalist mom at local venues.
Although Steve and John are currently making their CD debut as The Contes, they're no strangers to the record business. Their latest CD, Bleed Together marks their third independent release since leaving Mercury Records and their band, Company of Wolves, in 1992. In early 1993 they began a new project, Crown Jewels, and recorded two critically-acclaimed CDs -- 1996's Spitshine and 1998's Linoleum. Both records enjoyed coast to coast and international airplay on over 120 college, AAA and modern rock radio stations. The band's music was also featured on network television; WB's "Smallville", "Jack and Jill" and "Maybe It's Me", NBC's “Queer Eye For The Straight Guy”, "Providence" and “Ed”, CBS's "Jag" and “The Guardian” , Fox TV's “Angel” and “Glory Days”, ABC's "That's Life", MTV’s “Undressed” and in films, Ringers: Lord Of The Fans, Paramount / MTV’s Spring Break Lawyer [2001], Two Ninas [2000], Wirey Spindell [1999], American Reunion [2003] The Stand In [1999], Face The Music [2001] and Rules [1998].
In early September 2001, after years of touring and longing to release something under their own names, Steve and John, aka “The Contes” began work on a new CD, Bleed Together. The eclectic new record is a soulful stew of everything from power pop to Bossa Nova, soul ballad to lounge, rock & roll to Americana.
Touring of clubs, colleges, and conferences brought the Conte’s band Crown Jewels to the attention of many, including Musician Magazine, which named them one of its "Top Ten Unsigned Bands in North America" and Billboard Magazine, which selected them as one of "Billboard Talent Net's Most Outstanding New Acts of 1999." New York's Village Voice raved, "steeped in rock's royal tradition, Crown Jewels is a return-to-your-roots treasure." London's Classic Rock magazine agreed, giving them "four stars" and noting, "Linoleum has, acclaim aside, all the accepted merits of songwriting greatness, now they have to wait for the rest of the world to catch up."
Describing themselves, the brothers offer, "We've always tried to balance good songwriting with musicianship and feel, to blend the raw and the smart." Steve's solos have been described as "gems of reckless intelligence" by Guitar Magazine and Rolling Stone says, "Conte strokes his Gibson to great effect." Not only can these guys write songs, they can play. Keep an ear out for The Contes. They're serious about music and they're not going away.

THE CONTES out of my head

Steve Conte "So Much For Love"