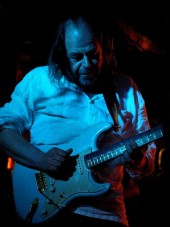 Real musicians know the only true accolade is the admiration of ones peers.

Ray Russell is a star in the eyes of musicians across the World.

A professional guitarist at the age of 16 with John Barry, Ray recorded his first solo album, Turn Circle, at the age of 21. For over four decades, Gill Evans, Tina Turner, Van Morrison, Art Garfunkel, Dionne Warwick, Bryan Ferry, Jack Bruce, Cat Stevens, Phil Collins, Robert Plant, Mark Isham, Georgie Fame, Heaven 17, Frankie Miller are but a few of the artists and producers who have known that Ray Russell would add something special to their work.

A consummate professional as guitarist, composer and producer, Ray has an extraordinary capacity for both virtuosity and versatility. More than just a great session player, Ray has been a collaborator, front man, band member, arranger, composer and friend to many of the World’s most influential musicians, bridging the chasms between different musical genres with ease. As a guitarist, Ray manages to draw every conceivable style from his instrument – blues, jazz, rock, fusion, new age and combinations of them all. He is equally as comfortable playing acoustic and electric guitars as he is with guitar synthesizers.

From ‘Plain Jane’, a period drama to the ITV flagship detective series ‘A Touch of Frost’; to “The Jump”, “Dangerous Lady”, “Hard Copy”, “Stay Lucky” and “Alleyn Mysteries”, many of televisions best loved shows are uplifted by Ray’s music.

ASCAP award for most played music on American Television,

Two Royal Television society awards for best series, theme tune, and use of music to picture. MIP award for Most original theme tune. In 2007, Ray became a visiting Professor of music at Leeds University.

A VERY SPECIAL THANKYOU TO PRAKASH FOR THE FANTASTIC FOOTAGE! CHECK HIM OUT ON YOUTUBE (USERNAME "PRAK14")

Ray Russell - Light Across The World 1 (Music From NBA Films)