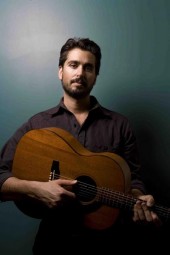 Location:
Toronto, Ontario, Ca
Type:
Artist / Band / Musician
Genre:
Soul / Folk Rock / Rock
Site(s):
Site
Label:
MapleMusic Recordings
Type:
Indie
BioConnections
Feist
Sam Roberts Band
Ron Sexsmith
Two Hours Traffic
Charlie Sexton
The Golden Dogs
Richard Julian
Don Kerr
S.L. Feldman and Associates
Paso Mino
Alanna
Burt Neilson Band
Bumstead Productions
MapleMusic Recordings
The MuseBox Canada
Jeff Heisholt
“My dream in music is to have a room feel like a common soul. I don’t know if I’ll ever achieve it but I’ve definitely felt something at my best shows–when the audience and the band are all feeling the same thing.” - Peter Elkas
A music obsessive for three decades now, Toronto’s Peter Elkas is an unabashed believer in keeping things real and, on his refreshing new album, Repeat Offender, he’s as loyal as ever to the rock ‘n’ roll sounds that ring truest to his psyche. Though partially crafted at Giant Studio (owned by Sebastien Grainger and Metric’s James Shaw), Elkas mostly made this record in his basement with co-producer Ian McGettigan (Thrush Hermit) lending his expertise to the proceedings. The result is a romantic, ‘buddy rock’ album in the vein of Bruce Springsteen (Elkas’ long-standing musical hero) or Keith Richards (“Cruel Thing to Do,” the title track), with sophisticated nods to Allen Toussaint (“Atlas”), Sam Cooke (“Cool Thing to Do”), and Frankie Valli (“Melody”) among others. Not your typical allusions for an artist so associated with underground Canadian music, but then Elkas has always been something of a populist when it comes to writing great, memorable songs.
In the heady days of the 1990s, when “indie-rock” was blossoming and bursting, Elkas roamed North America with a razor-sharp, dynamically clever Montreal quartet called the Local Rabbits. Influential cult favourites who drew Sloan’s murderecords out of the Maritimes talent pool for the first time, the Rabbits’ quirky, undeniable talent was evident to loyal fans, critics, and musicians (i.e. Neko Case made them her Boyfriends for a tour or two and the Breeders’ Kelley Deal had them back her up too) but, as with so many brilliant enterprises, the masses never caught on.
Since the Rabbits went on “indefinite hiatus” in 2001, Elkas has expanded upon his songwriting in that band, kicking against the zeitgeist by crafting soulful pop and rock songs that are AM radio-accessible but belie one of the most thoughtful musical minds in the world. His first solo album, 2004′s Party of One, was produced by Don Kerr (Ron Sexsmith/Rheostatics) and found Elkas straddling a line between experimental sounds and more traditional songcraft. But hooking up with Austin, Texas roots legend Charlie Sexton (Arc Angels/long-time guitarist for Bob Dylan) really sparked and focused Elkas. With Sexton producing, he and his finely honed Elkas Band cut the emotive Wall of Fire and critics swooned upon its 2007 release, leading the bandto tour extensively and play festivals like PopKomm (Berlin), In The City (Manchester U.K.), and SXSW (Austin, TX). When the dust and luggage settled, Elkas found himself at home and, in a respite from music, started his own dog-walking business; WestEndWalks continues to this day, enabling Elkas to clear his head and, well, hang out with a bunch of ‘man’s best friend’ for a while every day.
Besides being a gifted guitarist, keyboardist, and singer, peers will tell you that Elkas is a sweet dude and a great pal. Long-time friend Joel Plaskett can certainly attest to this and, after sharing so many of their formative years together on the road (Plaskett’s Thrush Hermit and Elkas’ Local Rabbits often toured together), it was no shock when Elkas joined the Joel Plaskett Emergency, as a full-timemember (though it likely surprised Peter to find the band opening for Sir Paul McCartney in Halifax in the summer of 2009 or landing in England the following summer, where they recorded at Abbey Road Studios and opened a concert series spearheaded by British impresario/chat-show host, Jools Holland). That same working camaraderie has led Plaskett to proudly release the new Elkas full-length, Repeat Offender, on his boutique, vinyl-focused imprint, New Scotland Records. At the risk of sounding like a snooty audiophile, Repeat Offender‘s gorgeous tones and tunes were meant for the warm grooves of an LP, and it’s a hell of a way for Elkas to find himself on wax for the first time.
As mentioned earlier, making this record was a really DIY experiment for Elkas, who’d never recorded his own band before. The success of the exercise fueled his confidence, spurring him on to produce the debut effort by Sister, a new band consisting of Plumtree siblings, Carla and Lynette Gillis, using his basement set-up. All of this activity followed an uncertain period for Elkas, where he genuinely questioned whether he should continue to make music at all, the melancholy fueled in part by the dissolution of his relationship with label, Maple Music, but also feeling lost in an age of socially mediated music (Elkas would rather perfect a wicked song then tell the world he maybe just wrote a cool tune on Facebook and Twitter).
Undaunted, resolute, and bolstered by his muse, Elkas has taken the reigns for his most poignant, self-aware, and most ear-pleasing album yet in Repeat Offender. These tracks are rock ‘n’ roll at its essence: lyrics dripping with unsteady longing and metaphysical angst, yet dressed up in the most infectious melodies, hooks, and just a killer sound, straight up. Repeat Offender contains jams that should burst forth from FM rock radio or get an arena full of rock fans up and catching a groove to music from the heart. It’s certainly inspired Peter Elkas to emerge from a period of self-doubt and reassert his search for an army of souls that gravitate to his point of view.
- Vish Khana