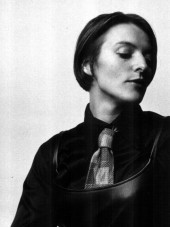 Video: In Bed With Hypnotique - on Women in Electronic Music

Her electro-cabaret live shows explore the fundamentals of a good yarn: trapped within her wicked web of intrigue is a mêlée of macabre tales definitely unsuitable for children, surreal lunar musical landscapes, stories from an ultra modern world, hypnotic ether sounds and darn funky grooves which transport the voyeur from near drug induced euphoria to the obsessive despairs of high Romanticism. Hypnotique tells the tales and amplifies the sounds of a new urban industrial synergetic age with real life tales of corrupt presidents, disenchanted prime ministers, child murdering witches, S&M lesbian housewives and dead media princesses. For music, take the pounding throb of an oscillator driven fairground whirr and beat in a viciously rotating blender with a dash of Berlin cabaret, film noir soundtracks & free jazz electronics, then serve in a cocktail glass of high glamour and brutal sexuality. Bottoms up!

Hypnotique seeks to explore elements of the dark side of the subconscious and ritual obsessions in her ever-confrontational work; combining Orwellian nightmares with an offbeat humour, she rides an explosive trail that leaves lesser mortals burnt out in the wake. With influences ranging from Throbbing Gristle to Kafka, Pierre Schaeffer, Ennio Morricone, Shirley Bassey, Laurie Anderson, John Barry, Lydia Lunch and Marlene Dietrich.

Hypnotique is also a leading light of the electronic oddity that is the theremin - the first electronic musical instrument. Stepping far beyond the sci-fi clichés, her virtuoso ability to tame this wildest of all instruments has taken her to the teaching salon of acclaimed thereminist Lydia Kavina, performances with Gong offshoot band Zorch and the Radio Science Orchestra, cameos on British television (including telling Paul O'Grady, 'you lacks discipline') and presentations for the late, great Dr Bob Moog. She's also produced sound installations for art galleries, given theremin workshops (at the behest of TV presenter Ian Wright) and presented 'Switched On', her own radio show on London's experimental platform Resonance FM celebrating 125 years of electronic music, including an interview with her mentor Jean-Jacques Perrey.

Her musical projects have taken her from the stages of Glastonbury to the BBC Studios of Herr John Peel to the darkened homelands of Berlin, East Germany, Belgium & Switzerland."

You are most welcome to contact me at: info@hypnotique.net - please don't email me through MySpace. Please add comments, check out all the multimedia stuff and enjoy or destroy!