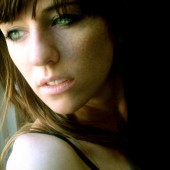 Camille De Bruyne was born in Brussels in 1982.She started singing from childhood and at 6 years old she was already performing on stage in both song and dance.

In 1998 she started her vocational training through taking courses at the Jazz Studio in Antwerp and working on songs with Andres Castel and Yannick Werther which became the basis of several pieces still include in her current repertoire, two of these compositions were commercialised beginnig .

She sang all the vocals with Guru’s Jazzmatazz on his European tour in 2006.

Since 2007, she has been touring with Baloji (rap/afro artist) as lead singer and also featured in the single “Coup de gaz”.

She is currently working on the new album of Marie Daulne, “Zap mama” with whom she is touring to date.

She created with her brother Colin De Bruyne a duet piano-vocals “DadSoul” with Soul and Gospel influences.

She is an integral part of the group “NY Gospel Experience” with whom she has made frequent appearances in Belgium and abroad for the last seven years.

Since 1997 she has been collaborating and touring, notably in West Africa and Europe, with John Arcadius (World/acoustic artist of Benin origin).

huling pagkakataon by ria for camxz

Milla Brune -The Other Woman