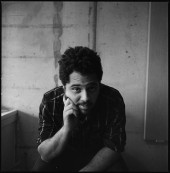 "When you combine an earthy, easygoing songwriting style, the influence of Donny Hathaway and Paul Simon and a penchant for warm, understated instrumentation, there's a good chance you'll get ear-pleasing results. Micah Dalton has, and he calls it 'alt. soul.'"-THE NASHVILLE SCENE

"Micah Dalton is a bright light of hope in a dark tunnel that lets me know that the real soul of music is in the roots of the songwriter.-BURNSIDE WRITER'S COLLECTIVE

"Though I have never met him personally, it is quite easy to tell that Micah Dalton is a risk-taker. Apart from the fact that his musical style is an appealingly intrepid mixture of folk, blues, soul, and R&B, Dalton has provided an extremely unique experience for the release of his third album, Pawn Shop."-OBSCURE SOUND

There was a time when an album didn't offer pleasures for the ears alone. Having a vinyl LP on the turntable and a cover sleeve's vivid, larger-then-life artwork in hand made for a rich multi-sensory experience. But that long since became the stuff of tall tales. That is, until Micah Dalton decided to liquefy the boundaries between artistic media with Pawnshop.

On the third recording project of his career, the Atlanta, Ga.-based singer-songwriter summons the audio-visual album experience from the shadows of memory, and goes a step further still. Pawnshop is twelve spacious Southern pop statements; it's a short story told in twelve vignettes; it's twelve visceral, pen-and-ink images; it's an artistic risk that pays off mightily, and nothing short of a radical re-imagining.

"The idea of creating characters and running them through storylines is a lot more interesting than just an album," says Dalton. "It is like going into a science lab and seeing what comes out. Using different creative media and seeing how they interact with one another and speak to people is always fun."

Dalton co-wrote four of the album's richly nuanced songs with Brooklyn-based pop songsmith Nate Campany and several others with longtime collaborator bassist/producer James Gregory. Dalton and Gregory put flesh on the song bones between January and August 2007, working out of Nashville's Smoakstack Studios (Derek Webb), Art Canvas (India.Arie, Mighty Clouds of Joy) and other locales, and enlisting the sensitive touch of multi-instrumentalist Paul Moak, guitarist Kenny Meeks (Sixpence None the Richer), keyboardist Ben Shive and others.

The tracks cover satisfying musical range, from the acoustic, soul-tinged warmth of "Take the Backroads," "We Came Alive Tonight" and "The Grandest Prize," to "Down, Down Put It Down"—a snaking R&B number laced with sharp string runs—and gospel-infused, loose-jointed, backwoods romps like "I Am a Man (The Autobiography of Milton Burrows)" and "Reverend Ramshack Run."

The songs, stories and images dwell in the fertile space between autobiography and imagination. You could say they're true and more-than-true at the same time. There are elements of Dalton in Pawnshop—a restless soul sojourning through rural Georgia in 1965 and the album's central character—but they're not one and the same. Dalton ensured that the project would have plenty of captivating twists and turns by bringing other creative souls into the conversation, Jewly Hight to write a "fictional" story of desire taking hold and Jason Harwell to render the striking visuals. There's enough there for the listener-reader-observer to get lost in over and over.

Dalton began erecting signposts to chart the course of his musical progression back in 2004 with his pop-inflected full-length debut, These Are the Roots. Next came 2006's seven-song Advancement EP, which displayed moments of kinship with Donny Hathaway and Marvin Gaye, but was anything but an exercise in imitation. In countless clubs, theatres, coffeehouses and colleges east of the Mississippi, Dalton has shared the stage with the likes of Jon McLaughlin, Mindy Smith, Gary Jules, Dave Barnes and other lesser-known but no less talented folks. In 2007 he also signed on with unique Athens-based nonprofit indie Rebuilt Records.

The momentum is continually building. And Pawnshop adds a whole new batch of sights, sounds and stories to Dalton's body of work.

Micah Dalton - Down, Down, Put It Down

Micah Dalton - Blame it on January