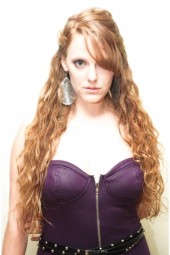 Location:
Nashville, Tennessee, US
Type:
Artist / Band / Musician
Genre:
Country / Folk Rock / Acoustic
Site(s):
Site
Label:
SweetSong Nashville
Type:
Indie
BioConnections
Colbie Caillat
George Strait
Sara Bareilles
Gavin DeGraw
Veronica Ballestrini
Patty Griffin
FLOREZ
Emily West
Rio Grand
Jypsi
Nashville-based Kari Smith gathers crowds with her fresh vocal style and contagious smile, whether it's local fans in a crowded coffee shop, or on stage performing for thousands. Rather than waiting to be discovered, Kari finds her audience in local and regional venues, and fills her time outside of performing with writing, recording, and teaching music. In addition to solo acoustic performances, Kari performs with other bands in a variety of genres as a vocalist, keyboardist, and rhythm guitarist. Through these experiences, she has had the opportunity to share the stage with such national acts as Huey Lewis & the News, Sugar Ray, and Switchfoot. Her powerful rendition of the National Anthem has been heard at Richmond Braves games, concerts including The Doobie Brothers and Hootie & The Blowfish, the Extreme Fighting Championship in Richmond, VA's Coliseum, sporting events at Lipscomb University's Allen Arena in Nashville, TN, and the Toughest Cowboy rodeo in Nashville's arena, The Sommet Center.
"As a vocalist, Kari is mature beyond her years," says producer Matthew Roberts. In 2005, she independently released EP "go with you", including the bluesy, driving rhythm of "I Call It Love," which was featured in independent film "Middle of the Road" (August 2005, Red Cactus Films). Producer John Henneberger says that her writing is "superb and reflects that of a seasoned veteran while maintaining a freshness in approach needed in today's musical landscape." In August 2006, she followed up with an independently released full-length album, self-titled "Kari". Her third record will be released in December 2008 by Music Row producer / engineer Dennis Money on independent label Vanillity Music.
Her first TV appearance in October 2007 featured an acoustic performance of her original music on PBS show "The Music Seen", and her first network appearance on CBS's "Virginia This Morning" aired in January 2008.
Kari made the move from Richmond, VA to Nashville, TN in 2006 to further her pursuit of performing and writing. She also holds an AA in Liberal Arts. Kari is a member of NSAI (Nashville Songwriters Association International) and ASCAP (American Society of Composers and Publishers.)