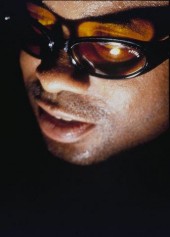 Atkins has cited the radio show of Charles "Electrifyin' Mojo" Johnson as a musical influence. Electrifyin' Mojo, a Detroit DJ, played an eclectic mix of music including Kraftwerk, Parliament and Prince. Atkins and friend Derrick May created mix tracks for Electrifying Mojo to broadcast, then began to create original music.

At Washtenaw Community College, Atkins met Rick Davis, with whom he recorded under the name Cybotron. Atkins coined the term techno to describe their music, taking as one inspiration the works of futurist and author Alvin Toffler, from whom he borrowed the terms "cybotron" and "metroplex".

Atkins has used the term techno to describe earlier bands that made heavy use of synthesizers such as Kraftwerk, although many people would consider Kraftwerk's music and Juan's early music in Cybotron as Electro. Techno is considered today as a specific genre.

Atkins began recording as Model 500 in 1985 with tracks such as "No UFO's", "Night drive", "Future" and "Clear". He continues to produce his own and other musicians' records under the Records label.