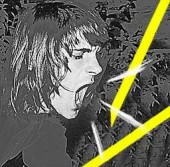 Tag(s):
Jackson His Computer Band
Location:
Ge
Type:
Artist / Band / Musician
Label:
WARP/SOUND OF BARCLAY
Type:
Major
BioConnections
LFO
Jimmy Edgar
birdpaula
Planningtorock
Randy Twigg
Max Pask
The pleasure quarters solitude
George Issakidis
Jackson & His Computer Band is the musical alias of Jackson Fourgeaud, the acclaimed French producer and DJ. A Parisian to the core, Jackson currently resides in Berlin where he is working on his second album and preparing an eye-opening live show. Like his adventurous music, Jackson is a bundle of energy and ideas whose thirst for provocation and stimulation has led to him being hailed as one of the wildest talents of his generation.
Now 28, he has spent more than a decade at dance music's cutting edge. A rough diamond in the Warp label's glittering crown, Jackson made serious waves when he released his debut album, 'Smash', in 2005 and toured the world with his first live show. Described by its composer as "a style orgy, a psychedelic celebration of conflict", 'Smash' soon became a word-of-mouth classic. Its follow-up is shaping up handsomely, too. Many know Jackson as the producer behind 'Utopia', the shimmering six-minute après-rave odyssey that was used to great effect in an O2 commercial in the UK.
Jackson is also in great demand as a DJ. His rugged, romantic approach to crowd-pleasing guarantees surprises. A techno tease and a new-wave futurist, anything goes in Jackson's sets – and frequently does. As a remixer, Jackson receives many requests from acts keen to hear his unique take on their sound. Most recently, Justice personally asked Jackson for a remix. He delivered the astonishing 'Do The JAHCB', a 12-minute megamix of Justice's debut album which set the blogs ablaze and rather flattered his Parisian playmates. A few years earlier, Jackson's breathtaking rework of M83's 'Run Into Flowers', later the stand-out tune on Michael Mayer's 'Fabric 13' DJ mix, introduced him to a whole new audience. Jackson has also remixed Femi Kuti, Air, Vanessa Paradis, Freeform Five and Jean Jacques Perrey & Luke Vibert's Moog Acid project.
His restlessly inventive style of Dada disco has been cited as an influence by the likes of Justice, Simian Mobile Disco and Sebastian. But Jackson's music is constantly evolving. By the time others have caught up with him, he's way ahead, designing the future somewhere else entirely.
Jackson began making music aged 15, intrigued by the musicians and equipment surrounding his mother, Paula Moore, a folk and blues singer. After his acid house debut on Pumpking records in 1996, Sound Of Barclay released the 'Sense Juice' and 'Gourmet' EPs under the name Jackson & His Computer Band. Even then, these thumping filtered house cuts sounded weirdly different to the prevailing "French Touch" style of Daft Punk and Cassius, leading to articles in NME, I-D, Jockey Slut and the like.
Warp picked up on these early records, released on French imprint Sound Of Barclay. Instantly recognising Jackson as a genuine innovator with his own distinctive sound and personality – rare qualities in modern electronics – they signed him.
Since then, Jackson has been declared "the great hope of dance music" by The Wire magazine and has dazzed ravers in Tokyo, Montreal, New York and across Europe with his extraordinary freestyle show. In his hands, the future sounds deliciously unpredictable, which is just the way it should be.
Praise for 'Smash':
"'Smash' explodes like a symphony for the devil" DJ
"Tremendous debut from French magpie electronicist" The Observer
"A beautiful, soulful, fucked up masterpiece" Vice

Jackson and His Computerband - Memory

Jackson And His Computerband - Seal

Jackson and His Computerband - G.I. Jane (Fill Me Up) **CENSORED** Official Music Video

Jackson and His Computerband - G.I. Jane (Fill Me Up) Official Music Video NSFW