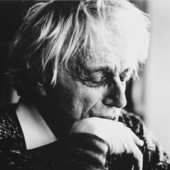 Gyorgy Ligeti was, along with Karlheinz Stockhausen, Iannis Xenakis and Pierre Boulez, one of a group of composers which revolutionised postwar music.

Rejecting classical musical forms and creating often sparse and atonal works, they continually withstood the derision heaped upon them by generations of critics.

Born in Transylvania, Romania in 1923 - though he later became an Austrian citizen - Gyorgy Ligeti studied at the conservatoire in Cluj (or Kolozsvar in Hungarian) and the Budapest Academy of Music.

Like Bela Bartok, Ligeti was fascinated by folk music and initially produced a number of arrangements in that idiom.

Appointed Professor of Harmony, Counterpoint and Formal Analysis at the Budapest Conservatory in 1950, he fled the country in the wake of the Soviet invasion six years later.

By the late 1950s, Ligeti's musical tastes had moved on. He now embraced the radical vision of a new music which was sweeping much of Europe.

Perhaps his most notable, certainly his most famous, piece was Atmospheres from 1960.
This work featured, along with Ligeti's Requiem and Lux Aeterna, on the soundtrack of Stanley Kubrick's film 2001: A Space Odyssey.

Other pieces were more idiosyncratic, like the aptly-titled Poeme Symphonique for 100 metronomes, in which the machines were set running at different speeds.

Critics damned some of Ligeti's work as crass and simplistic, but there is no doubting the strength of his only opera, La Grande Macabre, which enjoyed success at the English National Opera in 1982.

With its dark meditations on death and sexual excess, the work created quite a stir on its London outing. Ligeti's impish sense of humour was, no doubt, tickled.

Then there was his absurdist diptych, Aventures and Nouvelles Aventures, the latter including the smashing of a tea service.

According to taste, it put Ligeti at either the cutting edge or the outside left field of popular culture.

Ligeti himself admitted to his eclectic influences, ranging from cartoons and comics to the philosophical differences between the rigid order of clocks and the natural chaos of clouds.
Dogged in recent years by ill health, Ligeti's output was markedly reduced. In many ways the world had moved on, too.

But there is no doubting the huge importance of Ligeti's work, not just within the rarified atmosphere of the concert hall but in the wider popular cultural landscape of the 20th century.

György Ligeti - Requiem for Soprano and Mezzo-Soprano, Chorus and Orchestra