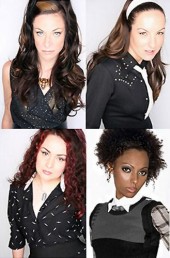 In addition to touring the USA non-stop with the likes of THE CRAMPS, THE REVEREND HORTON HEAT, SHONEN KNIFE and SOUTHERN CULTURE ON THE SKIDS, fans of Gore Gore Girls saw the band sharing the stage with THE EAGLES OF DEATH METAL and even as an opener for SUGAR RAY. Gore Gore Girls' straight-ahead aural attack on the senses has earned the attention of fans like LITTLE STEVEN VAN ZANDT, who has given the band plenty of airplay on the syndicated show "Underground Garage" and included them in the line-up of the history-making UNDERGROUND GARAGE FESTIVAL at Randall's Island, New York City, where they joined IGGY AND THE STOOGES, THE PRETTY THINGS and the NEW YORK DOLLS.

The band took their name from the 1972 grindhouse classic The Gore Gore Girls, directed by thrill-king Herschell Gordon Lewis, it was distinquished by its extreme gore and weird humor, as dancers were stalked by a killer. Long known as the 'Godfather of Gore' for movies like Blood Feast, 2000 Maniacs and The Wizard of Gore, Lewis incited the band to emerge from Detroit's urban jungle to fight against the tyranny of bland music with their own brand of nitroinjected rock & roll. Hypnotizing audiences everywhere with a shambolic fusion of girl group, go-go and garage, with the GORE GORE GIRLS, a new movement is born.

"To appreciate the GORE GORE GIRLS' music, you have to have a streak of wildness, a fierce independence of spirit, and an absolute belief in the unusual, the strange, the unpredictable, the offbeat and even the generally unacceptable"

"Gore Gore Girls are the Ronettes with Guitars" Lux Interior, THE CRAMPS

“Gore Gore Girls mix Stooges spit with Supremes soul like an itching in my heart full of napalm” Chuck Eddy, THE VILLAGE VOICEGOREBOOK.

The band does not book shows through MySpaceMessage from Gore: 'We love all our fans we've met in the US and all over the world! We love playing for you and hope to see you all sometime soon. Love Always, GGG"

Gore Gore Girls - Up all night

Gore Gore Girls - All Grown Up
▶ View All Videos