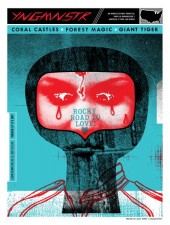 Giant Tigers’ new Me. We. captures

Locals Giant Tigers have released the new album Me. We., with the occasion marked by a JJ’s Bohemia gig this past Sunday night. The evening was a succession of fantastically energetic bands, including RTX, Hollywood and Slow Break, with Giant Tigers onstage last. Me. We. is one of those records that insist you should see Giant Tigers live. (I am here to confirm this.) Seven tracks with tight formats and fast meters—all under three minutes—catchy, distinctive hooks, and Nick Dupey’s distinct, powerful voice over face- punching drums beats and guitar licks make for an album perfectly suited for live performance.

Seeing them onstage, I thought, “These guys need a bigger stage.” With music that is the sound equivalent of stealing a shopping cart from Bi-Lo and taking it on a short, fast, out-of-control ride down the nearest loading-dock ramp, the full effect is felt only when the Tigers are in front of you. Listening to Me. We. does capture the essence of that energy aptly and makes you want more. Singer Nick Dupey e’d me,“Also, we are playing at JJ’s Easter Sunday with Monotonix from Israel. There will be things set on fire.”

Sounds like an occasion for wearing your Sunday best and getting out to see a local band who kick in adrenaline garage punk done as good as I have ever heard it. Mix with an Israeli band that sounds like a modernized Black Sabbath and you’ve got a recipe for a great night of live music.

By Robert McCrary: The Pulse

Giant Tiger is a very loud metal/rock band. With two guitars, drums, a bass and a screaming banshee of a lead singer, this band carried a decent sound while bordering on the edge of old-school (non-emo) punk. Their attire was simply layers of old torn up t-shirts that have long outlived their usefulness as both donations to goodwill and grease rags and they played to a very well packed out audience.

The band was very talented instrumentally. The drummer kept going even has his high-hat tipped and stage hands struggled to keep his set together. The lead singer looked drunk as hell, although you wonder how since we basically waterboarded most of the crowd: dousing them in massive puddles of beer as he attempted to simulate a seizure on stage.

One fan grabbed the mike and gave a shout out to his friends "three" and "four" as the band was one of the few that played a song in 3/4 time.The lead singer also sported a tiger patch that was safety pinned to his falling apart shirt.

Overall they were an all right band that played to a crowd that was very into them, even as they covered everyone in their blood, sweat and beer. It was a good show for fans of hard metal, rock and even classic style punk.

Don’t know much about Giant Tigers other than the fact that they are from Chattanooga and are as volatile as sack full of rattlesnakes.

.And just when I thought that my eardrums would surely burst and project blood across the room, the boys from Giant Tiger plugged in, saddled up and began to play.

Giant Tiger was positively superb. Its punk-inundated, fast-tempo, grab-your-beer-and-go party anthem "I Don't Feel Anything" and infectious "B B Buttercup" were exponentially gratifying. All eyes drifted toward the fervent crew as they played, and many eventually migrated toward the stage for optimal experience. The lead singer, Nick, was a jovial, wiry fellow, clad in a wool poncho, sporting a deconstructed tousled head of hair. Despite this being their first performance at The Pilot Light for these spunky Chattanoogans, they were perfect fixtures for the environment and blended impeccably. As impressive as their performance was, both for the eyes and ears, there was one major blemish; their set was unconscionably too short. There was to be only one amendment for this penitent err- a nocturnal, brew-filled bash, naturally.