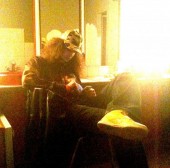 Location:
Brussels, US
Type:
DJ
Genre:
Other
Label:
sonig
Type:
Indie
BioConnections
Mouse on Mars
DATpolitics
Von Südenfed
Young Cubs
sonig
planet rock
VERT
smith n hack
A-Musik
Quentin Hanon
jab mica och el
firstcask records
Afrojaws
Rawakari
The Allophons
Sylvie Marecage
Nicolas Baudoux is a turntablist, artist and producer from Brussels. Coming from experimental pop music and going into sophisticated dance genre. After his early music activities with his brother called: Scratch Pet Land. He decided to push all concentrations into his solo project. DJ Elephant Power was born. Quickly, he transformed his place "Studio De Sable" into a high electronic beats, sounds and scratches platform research.
Thru the Cologne based label "Sonig", he released his first album "No Si, Ni So" in 2004. For the electronic scene, he presented more
than just a surprising and enjoyable debut. The album redefined the job and the self-image of the DJ. DJ Elephant Power is the legitimate
succesor to the turntablists who appeared in the middle of the 90s.
He released his second album "Scratch The Hulu" in 2007. Concidered like a mixture of free-jazz and new tendancy, this new long player from Dj Elephant Power was well appreciated by the UK magazines and labels.
"from the Scratch The Hulu, his second solo album, presents 12 more dislocations of the same highly strung technique, and the
superhuman dexterity in evidence suggest an expert at stacjking the plate at all-you-can-eat salad bar."from THE WIRE
Then his third release "Atlas Anthem" in 2008.This crispy production from him backs up the quality you would expect from one of the most prolific cut up DJ's around. Energetic dirty basslines and complex beats spliced with wacky instrumentation that's reminiscent of a splattered movie soundtrack in a spicy dubstep sauce. The same years, he recorded some scratches for the band "Von Sudenfed".
With his fourth release on sonig in 2010 "Elepha In Da Flash", DJ ELEPHANT POWER runs danger of jeopardizing reputation as an anti-perfectionist, because he (again) does it all totally different. Anyone who has ever experienced Nicolas Baudoux as a DJ will have fallen in love with his nimble fingers and the dynamic acceleration of pitch in his live sets. Today, he is part of a phalanx of DJs which have beaten a path between laptop-music and live performances to create the exceptional . He revitalizes the dancefloor with new musical styles which go against a uniform functionality. This time, synthetic strings and organ sounds compete in a soundclash of "Eastern meets Western style" for polished hooklines. This machine disco tells futuristic tales of lonely printing devices and ill-humoured laser guns. DJ ELEPHANT POWER reveals himself as skilful master in the art of staging his beats without indulging in a lethargic and complacent droning of bass sounds. Nicolas Baudoux aspires Laserfunk at the pink of perfection!
With a mixture of his own productions, skills and biggest dubstep tunes, Dj Elephant Power's live sets receive a big applaud all around Europe. In clubs or Festivals, you can catch him wowing audiences at Fuse, Dour Festival, Paradiso, Melkweg, Kilbi Festival, Phono Festivalor touring with bands like Mouse On Mars, Ratatat. The story is beginning.

In the studio with Dj Elephant Power