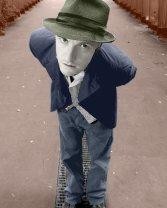 At the age of 6, Adam Butler started his musical career with his first piano lessons. At the age of 13 he swapped the piano for the electric guitar. At the age of 20, after a night taking acid found him outside the local music shop at opening time, wanting to swap his guitar for a sampler. At the age of 24, ankle damage forced him to stop skateboarding, and he became Vert.

Along with Milky Boy and Animals on Wheels, he started the label Bovinyl, but after releasing 4 12”s (including Vert's Broken Breakbeat Bebop), they quietly faded away, assuming that the world just didn't care. But the world did, in fact, care, and shortly afterwards Animals on Wheels signed to Ninja Tune, while Vert started working with Mouse on Mars's fledgling label Sonig.

He then released 3 albums of intricated instrumental electronica, including the acclaimed The Koln Konzert, a sample-free bastardpopisation of the original jazz classic.

After a crippling studio burglary in 2004, he emerged butterfly-like into the world, having transformed himself into a rusty hiphop showtune singer-songwriter, and produced an album full of skewed pop classics, Some Beans & an Octopus (Sonig, October 2006), in cahoots with musicians such as rapper Noah 23, guitarist Noël Akchoté, turntablist DJ Elephant Power and a mysterious Serbian double bassist.

Reviewers were either enraptured or bemused:

"a very, very unique album. Listen from start to finish and you're guaranteed to come out of the experience with a newfound muscial mindset" BPM

Since then, Vert has been performing across Europe, both solo and with his band (a trio featuring double bass and drums), and has remixed – apart from the usual tracks – artworks (Dieter Roth's Radio Sonata, commisioned by the Bayerischer Rundfunk), composers (Michael Nyman, remix to be performed with prepared pianist Hauschka in October) and jazz festivals (Novara Jazz 2006 – the remix, New Thing at Novara, is coming soon). He is currently working on a new album.

LE$LAFLAME- To The Top Going Up Vert ! (Official Animation Video)| Edit by @ged_kid