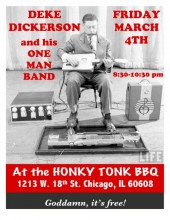 Deke's got a brand new CD -"LIVE AT DUFF'S" with the Modern Sounds! Order your copy at www.dekedickerson.com now!

JUST OUT--Deke has written not one, not two, but THREE giant new box set books for Bear Family Records. Two of the Box Sets are on MERLE HAGGARD, covering his Capitol Years from 1969-1976. Deke has written two books on Merle for these sets, over 250 pages of writing in all, and even got to interview Merle Haggard himself for over 5 hours! The third box set is on Merle's ex-wife and singer BONNIE OWENS, who had a long recording career on her own.

If you've got XM Radio, check out THE THEME TIME RADIO HOUR in which Bob Dylan hosts an hour of his favorite music based on themes like "luck" and "laughter." Deke has been hired to not only supply guitar instrumental music for the interludes, but has also been interviewed for the show and can be heard giving at least one nugget of knowledge most every show. Deke and Bob Dylan--who'd a thunk it? But Dylan is a diehard rockabilly fan, if you know anything about him, so it makes perfect sense.
DEKE THE JOURNALIST! Deke now has a bi-monthly column in Guitar Player magazine called "Deke the Guitar Geek." The latest issue (with Derek Trucks on the cover) has Deke's 2nd column, on the ultra-rare Stratosphere Guitar made in Springfield, MO in the 1950's.
In addition, Deke has been writing a slew of liner notes for lots of CD's. If you'd like to read some of Deke's writing, check out Sundazed Records new releases, PHIL BAUGH--LIVE WIRE! and BUCK OWENS--LIVE IN LONDON, Bear Family Records FREDDIE HART--JUKE JOINT BOOGIE, GLEN GLENN--DIM LIGHTS, THICK SMOKE, GLEN GLENN--ROCKS, and upcoming titles on ROY ORBISON--ROCKS and JOHNNY PAYCHECK--THE DONNY YOUNG YEARS and ROGER MILLER--EARLY RECORDINGS.
DEKE ON NPR! Did you hear the piece on "eefing" on NPR? Check out how Deke's article on "eefing" in SCRAM magazine subverted the airwaves of NPR with some very politically incorrect hillbilly culture--listen to the archive at npr.com.
This site is maintained for Deke not by him personally. Emails may not be personally replied, though Deke will try to answer all of them.
Thanks to Dave Wolfe for setting up this myspace page.
Layout Provided By Dave Wolfe