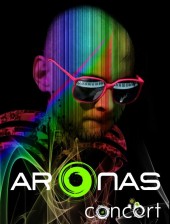 Just when you thought there was nothing more you could do with just piano, bass and drums, here comes Kiwi pianist Aron Ottignon and his band Aronas to confound expectations. Like The Necks, In the Country and EST, Aronas have found new ways to reinvent acoustic music, adding extra percussion and effects in an unstable, sometimes explosive mix. Ottignon's partnership with bassist/co-producer David Symes has the riffing power of a heavy metal backline. Add to this drummer Evan Mannell's slamming beats and Josh Green (percussion) and/or David Hibbard (drums) and you have a very original group sound and feel. Symes contributes two powerful tunes - The Splits and Triangle Treasure - while Ottignon demonstrates his compositional flair on the repetitive You Little Beauty, the tricksy Happy Song and the ingenious title track. There's nothing small about Aronas. They make big gestures, fat sounds and monster grooves, with a youthful energy that's yoked to genuine musical ability.

>"New Zealand born, Sydney based Aron Ottignon is only 24, but he has already developed a boldly original approach to composition and performance. Some of his tunes are built around strong melodic hooks that have the instant appeal of a cleverly constructed pop song. Others hang on the barest of harmonic pegs and are instead pinned to an insistent, pulsating rhythm (or series of rhythms). Silvery piano melodies, thumping bass riffs, rolling rhythms, and spiky, sometimes ferocious percussion breaks"Jessica Nichols The Age 13/07/05

Aronas brings together some of Australia's most in demand musicians. Drummer Evan Mannell is one of the hardest working and most admired in the business, displaying a deft creative touch to an amazing array of situations.With a punk attitude to match, Evan is quite simply one of the premier drummers in Oz. Bassist Dave Symes has not stopped working for a decade with everyone who matters, both as an accomplished performer and studio musician.Daves thumping basslines add some serious groove to any group he is involved in. He has also been a loyal deputy to Australia's king of funk, Jacky Orszaczky, playing and touring with Jacky for 6 years.Completing the line up is percussionist Josh Green, a powerful,innovative musician who has 15 years experience touring Australia and overseas with groups such as Pablo Percusso. His rhythmical knowledge is vast and spans the globe, from indigenous traditions to his own trademark train rhythms. The young ages of the group defy their industry experience and make Aronas a formidable line up. It has lead one reviewer to state "their music is too good to be true", Sally Brand 27/04/05 The debut album, Culture Tunnels, is further evidence of this. Utilising the two drum/bass format, there is an enormous diversity of rhythmic ideas, and the group draws on everything, from dirty punk-rock sounds to earthy bluesy feels, to funk grooves. These are married with lyrical melodies, penned and played by young piano prodigy Aron Ottignon, and, most importantly delivered with a fresh, intense energy and unity of sound. Every song is a journey, and there is that constant and most satisfying feeling of not quite knowing where the players will next take their ideas. One of the most fascinating aspects of the group is the way it draws connections between the percussion-based cultures of the Pacific islands and the relentless, rhythmic drive of contemporary techno and trance dance music. This islander element is given more authenticity by the fact that percussionist Josh Green studied with a log drum master in the Cook Islands. His master Tumupu Jr dubbed him" White Thunder" and gave him his blessings to compose and play the beautifully complex rhythms. This musical experiment has all the energy and enthusiasm of a punk/rock outfit with driving rhythms and grooves, their sound is cultured and rife with emotion and expression. Aronas understand the art of mastering its audience through the gradual building and release of tension in a skill that is becoming all too rare amongst dance orientated live groups. The band has already gained a cult following through strong and passionate live performances. Heralded as the new jazz wizard by the Sunday Telegraph, Ottignon can spot a rut a mile off, and the music business is furrowed with them. Rather than getting stuck in one, Ottignon found inspiration in relatively untapped musical waters. Those waters were the log-drumming music of the South Pacific, which Ottignon heard while growing up in Auckland. The same musical odyssey led the pianist to recording with his own jazz trio at the age of 14 and been awarded the 2003 Bells Award Best Young Australian Jazz Musician of the Year (he also plays Russell Crowe's private parties, including his wedding), there's no doubt Aron is Australia very own jazz prodigal son. SMH.