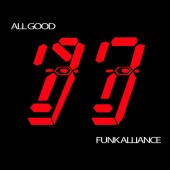 Location:
Alexandria, Virginia, US
Type:
Artist / Band / Musician
Genre:
Breakbeat / Down-tempo / Funk
Site(s):
Site
Label:
Funk Weapons, Super Hi-Fi and Jalapeno
Type:
Major
BioConnections
Solillaquists of Sound
URSULA 1000
DJ A SKILLZ
Fort Knox Five
MALENTE
SMALLTOWN DJS
Mat The Alien
Flow Dynamics
Ken
Featurecast
Wax (b)Romeo
Thomas Blondet
Freddy Fresh
Danny Massure
Goodgroove Records
Jalapeno Records
Wicked Lester
Tal M. Klein
DJ REGAL
Delay
Funk Weapons International
Geriba
Dj Rusty B (AGFA)
Qdup Foundation - Qdup Records
Sleeve
Super Hi-Fi
Frank (AGFA)
Think Tank
Hailing from across the Potomac in Alexandria, VA, The All Good Funk Alliance have released several singles since 1997, and they have slowly built a loyal following of people hungry for that organic break-beat funk sound. From running their own labels Funk Weapons and Super Hi-Fi, to remixing Kraak & Smaak, Fort Knox Five, Ursula 1000, Woody Herman, etc. the boys have been around the block. Their sound has developed into many different styles from which they have released up-tempo b-boy jams and hip hop as All Good Funk Alliance, and house music as B-team. In 2004 they released “On the One”, a collection of past singles and new songs, on the defunct label Sunswept. In 2005 they self released “Social Comment” their second album which was a politically charged album of hip-hop and down-tempo, featuring the ideals and socially charged views from the mind of Swamburger and Alexandrah. Having released "Sling-Shot Boogie" over the summer of 2008 that was jam-packed with dance-floor dynamite like "Super Jam" and "Watch Out", the boys enjoyed some positive feedback and some great remixes. Currently working on some new ideas and sounds for some future singles, AGFA is preparing for 2010 with some exciting new material. Known to rock a mass of unreleased cuts, fresh beats sprinkled with house and funk, the boys rock clubs from Columbia to San Fran, and play frequently wherever the groove is needed. They have even opened up for the legendary James Brown! An All Good set is bound to make your body move.

All Good Funk Alliance-Watch Out

All Good Funk Alliance - The One